The futures of various US indices were trading marginally in red as investors braced for one of the busiest weeks of the earnings season.

The futures linked to Dow 30 were down 9 basis points (bps), while those linked to S&P 500 and NASDAQ 100 were down by 8 bps each on Sunday evening.

The guarded start to trading for the week is on back of two major macro event and four big ticket earnings.

The US would be announcing the first quarter growth numbers of the economy later Thursday – and markets are hoping for a blockbuster performance.

The markets, on other hand, are discounting for a status quo by the US Federal Reserve in its monetary policy decision – to be announced on Wednesday.

But the biggest interest for investors might be coming from the earnings numbers. US’ largest companies valued over US$1 trillion –  Apple Inc (NASDAQ:AAPL), Microsoft Corporation (NASDAQ:MSFT), Amazon Inc (NASDAQ:AMZN), and Alphabet Inc (NASDAQ:GOOGL) – would be announcing their results this week. These four companies are worth US$ 7.47 trillion – more than most of the equity markets across the globe. 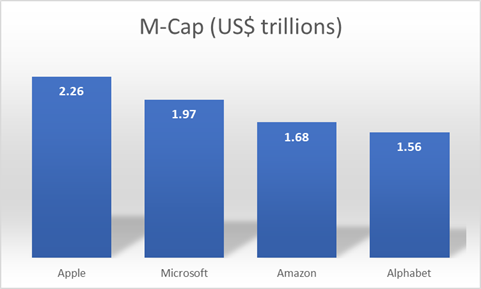 As a quarter of S&P 500 companies have announced the March quarter results till now, most of them have outperformed the revenue guidance and the street estimates.

The markets would also keep a keen eye on moves by US President Joe Biden, who will likely move to double the capital gains tax on wealthy Americans. The excess revenue collected from the tax hike is expected to be used for the second portion of his Build Back Better agenda.