The whereabouts of high-profile Alibaba founder Jack Ma has been the hot topic for a while now. Reports have it that the billionaire has been allegedly missing since criticizing the Chinese government, having not made any public appearances in over two months.

The speculation first reared its head after Ma, a judge at his famous talent show Africa’s Business Heroes, was not only substituted by an Alibaba executive in the November, but his photo was also removed from the show’s website. The rumors only got stronger when the Chinese entrepreneur was recently unable to show up for the show’s finale episode as well.

Responding to the claims of Ma’s disappearance, a spokesperson with the Alibaba Group reportedly said that Ma failed to participate on the talent show’s judging panel because of a “schedule conflict”.

Jack Ma, a supporter of market-driven economy, has a reputation of not being on the best of terms with his country’s communist government led by President Xi Jinping. His enterprise Ant Group, which was on the verge of making history with its initial public offering (IPO) last year, came under the scope soon after Ma made a controversial speech in October 2020.

In an address at Shanghai on 24 October, Ma accused the Chinese government of suppressing innovation and called for a reformation of “the current system”.

Within the next couple of weeks, the Ant Group’s IPO was halted sighting reasons that there were “significant issues” regarding the “regulatory environment” of the financial technology industry.

Surprisingly, the sudden suspension came after the company’s dual listing had already been approved by the China Securities Regulatory Commission on October 21.

Many financial investors were of the opinion that the suspension was devised to keep the major enterprises in the financial technology industry from growing “too big”.

Soon after the IPO halting, Chinese regulatory bodies also initiated an anti-monopoly probe into Alibaba in December. The Ant Group was also reported asked to reshuffle its operations.

Prior to the suspension, Ant Group had been valued at a record high US$ 37 billion ahead of the IPO. The company was heading for dual public listings on Shanghai’s Star Market and the Hong Kong Stock Exchange, putting up about 1.67 billion shares on each platform. 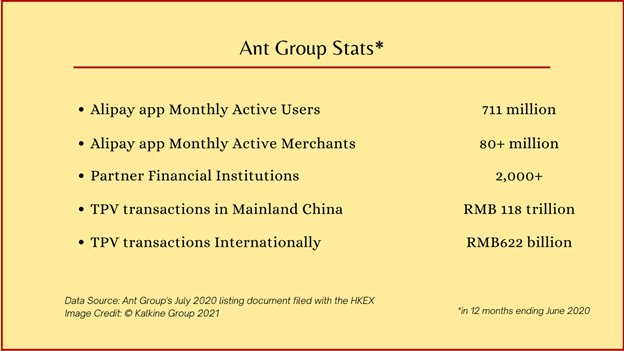 The second-richest Chinese citizen (as of July 2020) reportedly lost US$ 11 billion following the China’s recent scrutiny.

Jack Ma was planning to spend some 40 per cent of the gross proceeds made from Ant Group’s IPO on research and innovation, and some 30 per cent on improving the company’s online services.

China’s increasing crackdown on its tech industry, which has a wide global reach and is raking in billions, is not just limited to the Ant Group.

In November, the Chinese government pushed forward draft antitrust regulations to curb an increasingly monopolistic behavior by its tech behemoths. The act wiped off billions of dollars in the market value of these tech giants. This increased scrutiny is now forcing investors to rethink their holdings in these companies.