Chinese business magnate Jack Ma’s Ant Group has been the talk of the town for a while now. Investors waiting to buy a piece of it may not have to wait much longer as the financial technology giant is set to pull off the largest initial public offering (IPO) in the world.

One of the biggest technology firms in the world, Ant Group is expected to raise over US$34 billion in the upcoming IPO. It is also set to boost Ant Group’s market valuation to about US$ 310 billion.

The previous record was set by Saudi Arabian oil company Aramco last year, which raised over US$29 billion in an offering on the Riyadh stock exchange. Ant Group’s upcoming public listing would surpass its sister company Alibaba’s (NYSE:BABA) IPO as well, which had raised about US$25 billion in 2014 when it began trading on the New York Stock Exchange.

Having priced its shares for US$10.32 a pop, Ant Group is opting for dual listings on the Hong Kong Stock Exchange and the Star Market in Shanghai. It will be offering 1.67 billion shares on each of the two platforms., which equate to about 11 per cent of the company in total.

Its dual listing was green lit by the China Securities Regulatory Commission on Wednesday, October 21. It came after the Hong Kong Stock Exchange also approved the offshore portion of the listing.

The Alibaba Group stands as its largest shareholder, with an equity share of 33 per cent received in September 2019.

Alibaba announced on Monday, October 26, that it has agreed to subscribe for 730 million A-class shares of the Ant Group. Based on the share price of US$10.32, Alibaba’s total consideration for the subscription would be around US$7.4 billion. Alibaba is also expected to get up to 31.8 per cent equity interest in Ant Group following the public offering.

Ant Group is one of the top providers of online payments and finance platform in China based on payment and transaction volume, as per its July 2020 listing document filed with the Hong Kong Stock Exchange (HKEX). The company saw its total payment volume (TPV) transactions touch RMB 118 trillion in China and RMB 622 billion internationally in the twelve months ending 30 June 2020.

Ant Groups digital payments app Alipay, which is the largest of its kind in China, had more than one billion active users and around 729 million active digital finance users on a yearly basis of June 2020. Alipay focuses on an array of services ranging across providing users with online finance technology, risk management solutions, investments and insurance, customer reach, etc. 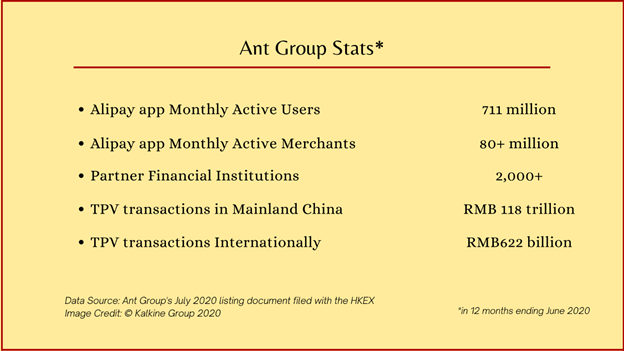 Ant Group also reported in its listing document that Alipay had over 80 million merchants and around 711 million active users on a monthly basis until June 2020.

The company said that its operating profit was up over 34 per cent to RMB 24.9 billion in the latest six-month period.

Ant Group saw its total revenue from segments CreditTech, InvestmentTech and InsureTech amount to RMB 45.97 billion in the six months ending June 2020, up over 63 per cent. Revenue from its digital payment and merchant services stood at RMB 26.01 billion in the same period.

Where Does Ant Group Stand?

Based in Hangzhou, Zhejiang, Ant Group is aiming to garner a customer base of two billion. It has reportedly raised around US$ 22 billion via four rounds of funding.

Adding another feather to its hat, Ant Group revealed a new online copyright services platform, powered by its blockchain-based technology AntChain, on Thursday, October 22. The platform is meant to help content creators to authenticate original works a faster pace and lower cost.

The final date of Ant Group’s IPO is yet to be revealed, but the news of its approaching public listing has been cooking up a storm for a while now.

Experts have been weighing in on major Chinese companies choosing home stock markets over Wall Street big guns, hinting at the rising tensions between the United States and China. The Donald Trump administration has already proposed legislation seeking the delisting of Chinese companies which refuse to provide audit reports.

Not too long ago though, US President Donald Trump dubbed Jack Ma as “a friend” of his when the latter donated some 1,000 ventilators to the US back in April. Only time will tell whether Ma and Trump’s ‘friendship’ take Ant Group to the Wall Street.