How the Amazon share price has risen over time, management changes that we know about

Tech behemoth Amazon Inc (NASDAQ:AMZN), with a market capitalisation of US$1.676 trillion and having multiple business units, is currently generating a steady revenue growth and rising profit margins.

Over the last couple of years, and even during the coronavirus crisis times when most of the companies are struggling to stay afloat, Amazon, a part of FAANG stocks, has been reporting growth after growth and increasing headcount regularly. The Seattle-based e-commerce and cloud computing player could be one of the few companies that seem to be immune to the COVID-19 effects.

INTERESTING READ: Is COVID-19 pandemic the mother of tech Innovation?

As the coronavirus cases rose, people were compelled to stay at home and businesses were shut for many months. Amazon saw an opportunity in this, and instead of cutting down on operations, it took charge and benefited from the consumer behaviour and continued with adequate services. The lockdown saw a surge in sales with Amazon reporting a 26% increase in net sales in Q1 2020, and more recently, a 40% jump in Q2. As a source of entertainment during the lockdown, a lot of customers also joined the Amazon Prime customer reward program. Currently, about 69 million people subscribe to Amazon Prime in the US.

Amazon has shown a capability to outperform in such crisis times with financial ability and superior global infrastructure. 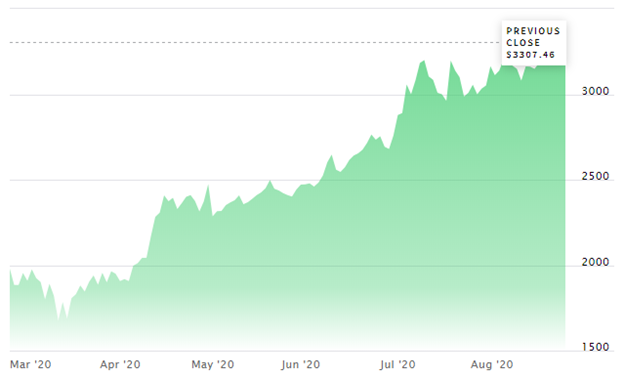 ALSO READ: Amazon's Jeff Bezos sets a new record as world's richest person, with a net worth above US$171 billion

Amazon, a cloud-computing & e-commerce giant, has most of the sales coming from retailing, and it is usually valued at the discount to revenue. The Company is generating most of its income from warehousing and delivery. The AMZN shares are getting recommendations from the analysts in the market, and investors are also keeping an eye on the stock. Its shares, last month, took a roller coaster ride from high to low in a day.

Earlier, On 16 March, Amazon share price hit a one-year low when health crisis fear struck the stock markets. Currently, the Amazon share price has nearly doubled. Before the pandemic, its shares were stuck in a phase and only moved sideways, a situation which makes investors worry about their significant investments and the e-commerce giant started facing the pressure. However, the pandemic changed the market dynamics resulting in increased demand from the consumers locked at home.

It had a 2-for-1 stock split in 1998 when Amazon was a small company. The second stock split was 3-for-1 in January 1999 after which its share price surged about 755% in just seven months. The Company saw its last split 2-for-1 in September 1999. The share price has witnessed outstanding gains since Amazon’s introduction on the stock market. If one had invested US$10k in the Company back in 1997 at US$18 per share, that investment would have worth more than US$22 million on 25 August 2020.

GOOD READ: Hey, you know what! Amazon is building its first Robotic Fulfilment Centre in Sydney

Opportunities during the pandemic crisis:

When most companies were laying off employees and implementing cost-cutting, Amazon surprised the world with hiring 100,000 more workers and then again added 75,000 workers worldwide. To cope up with the salary of the employees, the Company increased its investment to more than US$500 million from US$350 million.

In 2017, Amazon acquired Whole Foods Markets worth US$13.4 billion, and it also invested heavily in cloud computing, transportation, video content and online video services. Amazon Prime competes against Netflix (Nasdaq:NFLX). It also has a footprint in the smart speakers' industry with a leading product called Echo.

DID YOU READ: Microsoft and Amazon: Titans of 2 different Worlds with Technology as Connecting Thread

Few of its recent successful acquisitions are:

Amazon’s executive Jeff Wilke is stepping down from the Company in early 2021. Wilke has been with Amazon since 1999 and was often considered as a potential successor to Jeff Bezos. The Company’s Retail Operations Senior Vice President Dave Clark will take over Wilke’s position.

The retirement announcement has come as a surprise as he is one of the long-tenured executives. Jeffrey aka Jeff Wilke has headed Amazon’s worldwide consumer unit since 2016.

Jeff Wilke was considered Jeff Bezos left hand and was promoted as chief executive of Amazon's Worldwide Consumer business in 2016. He has overseen Amazon’s massive online marketplace and its operations, technology, and marketing, and led Amazon Prime.

DID YOU READ: Are FAANG stocks still the money-making machines? Jeff Bezos’ net worth surges in 2020

Amazon has been reporting double-digit revenue for a few years now. In 2019, its revenue increased by over 20% compared to 2018 figures, which in turn, were ~31% higher than 2017 numbers.

For Q2 FY2020, the Company recorded adjusted earnings of US$10.30 per share, dwarfing Wall Street’s estimate of US$1.48 per share. Amazon’s reported revenue of US$88.9 billion was also considerably higher than the consensus estimates of US$81.4 billion.