US Stocks Picking up and losing the steam – How are the trends changing?

The US stocks on Thursday, 30 April 2020 declined after the Washington Post released a post that US officials are crafting retaliation actions against China as Trump administration criticizes China for its COVID-19 management. S&P index which closed at 2939.51 points on 29 April 2020 dropped and reached 2912.43 points, representing a drop of ~ 0.93%. Dow Jones Industrial Average fell by 1.17% and ended the day’s session on Thursday 30 April 2020 at 24345.72 points.

US President’s Dissatisfaction on Situation Created By COVID-19:

US President, Donald Trump has every now and then stated that it is not satisfied with how China has handled the coronavirus situation that the entire world is struggling with. The infectious disease has a put millions of lives at stake and shaken the global economy. The US fears that China has not shared the complete information surrounding the origin of the virus. On that front, the senior Trump administration officials have asked American spy agencies to look for evidence that the virus originated from the government laboratories in Wuhan.

The President continues to target China and said that it should have stopped the virus spread quickly so that it would not have impacted the entire world.

Job Losses in the US due to COVID-19:

Due to the impact of COVID-19, there has been a significant increase in the number of US citizens seeking jobless benefits. As per the statistics report published by the Bureau of Labor Statistics, United States Department of Labor released on Thursday 30 April 2020, the US registered around 3.8 million unemployment claims last week.

During March 2020, the unemployment rate was higher as compared to the previous year. There were total 45 such areas where the jobless rate was less than 3% while there were 11 such regions with a jobless rate of at least 10%.

Nonfarm payroll employment grew over the year in 21 metropolitan regions. It dropped in 1 region while remaining unaffected in the other 367 regions.

As per the report released by the Bureau of Economic Analysis on 30 April 2020, the personal income had gone down by 2% in March 2020, disposable personal income by 2% and personal consumption expenditures by 7.5%.

The decrease in personal income was due to a reduction in compensation. The drop in the real personal consumption expenditures in March 2020 was because of the decline of US$829.9 billion in paying for services and US$104.9 billion in expenses for goods. 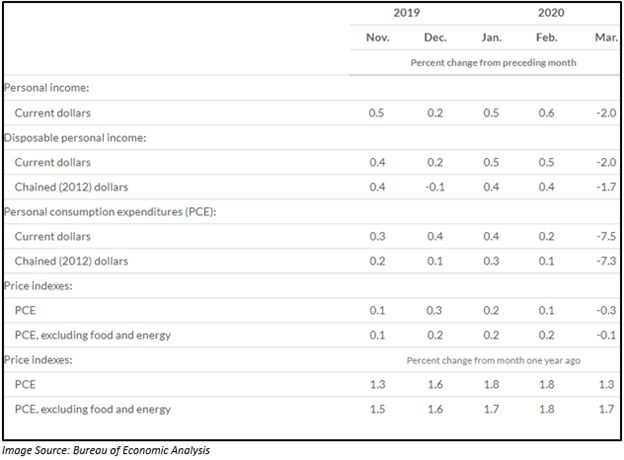 Let us now look at some of the big players in the US market and see the impact of the coronavirus outbreak on their business:

Apple has posted its Q2 FY2020 financial results for the period ended 28 March 2020 on 30 April 2020. The Company highlighted that its quarterly revenue had gone up by 1% to US$58.3 billion as compared to the previous corresponding period.

Despite the COVID-19 impact, Apple was able to grow during the Q12020 because of an all-time high in Services and quarterly record for wearables.

The Company expects that business performance would be impacted in the present situation which comprises of tenure and effectiveness of shelter-in-place orders, the efficacy of economic stimuli globally followed by the rise and fall of currencies relative to the U.S. dollar.