Till now, optimism and hopes about a favourable deal with the European Union have supported the pound. With the EU summit scheduled for tomorrow, all eyes are pinned on the Brexit trade talks. Experts predict that the pound’s value could slash by 5 per cent if the UK trade talks with the EU reach nowhere.

Maintaining a counter-consensus view on GBP, HSBC, UK’s largest bank said that even with a beneficial Brexit deal, pound sterling could feel the burn in 2021.

The bank has pointed out two reasons that would weaken the pound. One is that the trade friction could rise even if a Brexit deal is cliched this year as the UK would still face a greater cost of non-tariff barriers with the EU.

A UK treasury report indicated that this factor itself could raise the cost of doing business by 14 per cent for the nation. A no deal Brexit would in any case see much higher rise in costs.

The second reason is the resurgence of corona cases in the UK which are pulling the economic growth down. There are rising fears of a double dip recession. The UK economy is more severely impacted than many of its G 10 partner nations. In fact, earlier this year, Britain underwent the biggest negative growth shock in the second quarter of 2020 amongst all the G 10 economies.

The recent economic surprises like a rise in housing prices and improved retail activity are flattening and appear unsustainable with fresh restrictions in place. Government support also looks to be fading out.

At the time of pre-London open on Wednesday 18 November, the pound sterling was valued at $1.3260, marking 0.07 per cent gains on the previous day’s close. 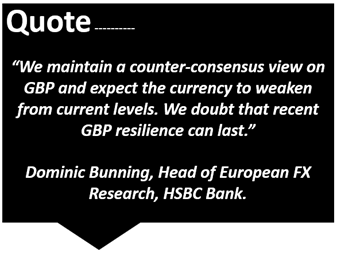 HSBC analysts claimed that the GBP-USD value doesn’t seem to factor in the complete impact of Brexit outcome, with or without a deal, given that it is trading close to its historic long-term fair value. It can’t be ignored that a nation’s currency is a crucial channel that could be used to offset the impact of the greater costs.

HSBC indicated that the GBP-USD value would fall by up to 10 per cent if a Brexit deal is negotiated. It would drop by up to 25 per cent in case of a no deal scenario. Deal or no deal, the Sterling would feel the heat, said Dominic Bunning, Head of European FX Research at HSBC Bank plc.

Any weakening of the pound is usually expected to be positive for the FTSE 100 index that covers the major London listed companies. A stronger pound puts pressure on the British exports.

The UK Consumer price inflation (CPI) has recovered from 0.5 per cent in September to 0.7 per cent in October driven by increased economic activity.

The core CPI which excludes food and energy items increased to 1.5 per cent in October from 1.3 per cent in September on an annual basis, as the growth momentum supported business expansion during October.

On a short-term basis, these inflation figures could support the recent higher trend in the GBP/USD to continue.

Brexit deal to be ready by next week

Media reports suggest that a favourable Brexit deal is just days away with France and Ireland moving towards Britain’s position. However, there are still many areas of discord between the UK and the EU like the enforcement mechanism.

Some analyst felt that the two would strike a narrow deal that eliminates any tariffs on movement of goods.

20,051 new coronavirus cases were reported in the UK on Tuesday 17 November. The number of deaths due to the Covid-19 infection was reported to be 598 on the same day, its highest value since May.

If media reports are to be believed, households might be banned from mixing once the lockdown ends on 2 December to control the disease from spreading any further.

While the government is continuing with its aid to stimulate the UK economy, it might not be sufficient to push up growth in the medium to long term. The job scenario is bleak and the unemployment rate has risen to close to 5 per cent in the nation, which is worrisome.

Public debt has crossed a whooping value of 2 trillion. Despite the treasury extending the popular furlough scheme to protect jobs, Rishi Sunak the chancellor of the exchequer noted that big support measured will eventually need to be tapered off as they are unsustainable and have their own negative side.

Private investments are sharply down in the country due to the uncertainties posed by the unprecedented pandemic led crisis.

Andrew Bailey, governor, Bank of England would deliver a speech at 4.30 pm British time today where he is likely to talk about negative interest rates.