According to media reports, the latest Covid-19 restrictions are impacting the British economy less severely than the first lockdown imposed in spring. The reason cited is that the second lockdown rules are not as restrictive as the earlier ones, allowing most people to continue working more or less as usual.

England is undergoing the second week of the nationwide lockdown that enforced stricter rules on the Britishers. The lockdown began on 5 November and is slated to last till 2 December, when the nation would be entering a 3-tier system that prevailed before the new rules were imposed.

Most of the crucial economic indicators like the number of people travelling to work and heavy goods traffic volume have remained stable post 5 November, when the second lockdown began. This reflected that most factories and offices remained operational, which is good news.

Analysts pointed out that the economic damage from this lockdown will not be as harsh since some sectors like construction and education are still open which weren’t the first time around.

But not all is as rosy as this. Despite the production-related resilience, many consumer service sectors continue to suffer and haven’t even recovered from the harmful effects of the March lockdown.

At the same time, many retailers were offering new online options to boost sales this Christmas. Online shopping saves time and money, apart from being a safer option, explain the market analysts. While online retailers prepare for a bumper winter, inexperienced web shoppers should be careful about scams, analysts warn.

Web experts pointed out that more people have fallen victim to online scammers post March this year who set up fake websites and steal personal information of the naïve customers.

According to latest stats from Fable Data, a firm tracking bank transactions, consumer spending in the UK shrank by 2.8 per cent for the week ending 8 November as compared to the same week last year. As a contrast, this spending grew by 1 per cent in the previous week, before the lockdown began.

The UK consumer confidence index compiled by PwC had plummeted to minus 10 in November, post lockdown, from minus 1 in September this year. It was the steepest fall observed in the index after March this year. This showed the fragile nature of the consumer sentiment despite a decent bounce back in the summers, said Lisa Hooker, consumer markets lead at PwC.

Restrictions have clearly altered the public mood, especially the young adults who are most affected financially and are uncertain of their future, added Hooker. The unemployment rate is soaring, and future of the job market continues to remain bleak.

Going to shops and recreation centers contracted to less than half of the January levels during the week starting November 5. But thankfully, the saving grace was that this contraction was not as harsh as during the first week of the spring lockdown.

Economists forecast the British economy to shrink between 3.5 to 4 per cent during the fourth quarter of the year as compared to the previous one.

In the three months to June, the UK economy contracted by a record 19.8 percent, reflecting the severity of the first lockdown.

Households as well as the firms are in a better position than before in terms of adapting fast to the new restriction, explain the experts.

The daily coronavirus cases across the UK fell from 24,141 on November 5 to 21,363 on November 16, according to government statistics.

Sources revealed that the UK government was evaluating the effectiveness of the 3-tier measures. Once the new lockdown is over, the government does not rule out the possibility of introducing a stricter tier-4 set of measures, if needed, said Robert Jenrick, Communities Secretary.

He informed that the new measures might be announced next week, while some officials cautioned that the ongoing lockdown could be extended as well, if the virus infection rate wasn’t under control. 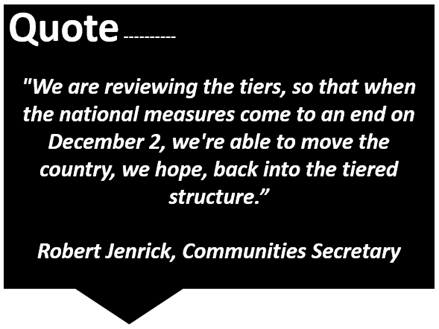