What would US$100 dogecoin investment a year ago be worth today?

The internet’s magic lies in its ability to create overnight success for just about anything that is trending, even with no solid grounds backing the same. Dogecoin is one of the many examples of how a viral joke can transmute into a serious investment venture, thanks to the power of the internet.

What started as a meme has become one of the most significant highlights in the cryptocurrency era, known as the Dogecoin. It is one of the first meme tokens to have entered the crypto arena and has by far been the most successful one in this category, with business tycoon Elon Musk backing the same.

Experts speculate if Dogecoin’s rise could be as meteoric as Bitcoin’s and whether the crypto would soon overtake the world’s largest cryptocurrency owing to its widespread popularity among young traders. But that is not all for Dogecoin! The crypto has increasingly gained acceptance from high-profile retail companies who have promised to accept payments in DOGE.

INTRESTING READ: Is the future of Dogecoin in good hands?

A bit more about the cryptocurrency

The crypto was co-created by Shibetoshi Nakamoto and gained much of its success in early 2021 through a Reddit message board called WallStreetBets, which had also gained infamy during the GameStop share price rally. 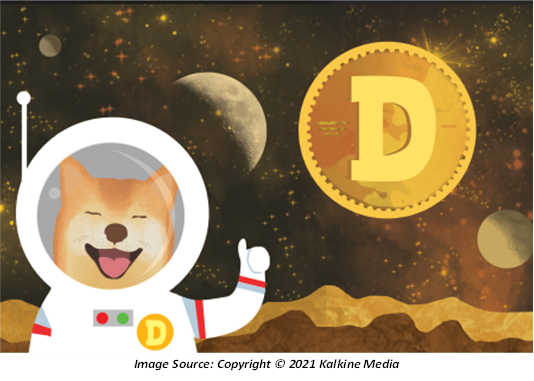 Dogecoin’s value during late September 2020 ranged lower than a cent at US$0.0026. However, over one year, DOGE’s value has increased to around US$0.2037, as recorded on 30th September. Thus, the mem coin has grown by an eye-popping 7700% in this duration. This means that your US$100 invested in Dogecoin a year ago would be equal to US$7800 today!

Dogecoin’s entry into the list of mainstream Altcoins has been fairly quick owing to its inflated popularity in the space. Be it AMC Entertainment, Verifone, Bitpay accepting DOGE for payments or talks of Taco Bell or Tesla joining the list, Dogecoin has been the talk of the town.

Additionally, Dogecoin appeals to the meme-obsessed population of young traders who find a sense of relatability in the crypto. Apart from these novice traders, Dogecoin has caught the fancy of Elon Musk, who has constantly been known to tweet about the meme coin and, in effect, trigger price hikes.

RELATED READ: ‘Who Let the Doge Out’: Elon Musk’s tweet that did wonders for Dogecoin

Dogecoin’s essence lies in its quality of being a lighthearted movement amid a world of cautious trading. This feature has enabled Dogecoin to retain its position in the market and become one of the most famous cryptocurrencies of today.

ALSO READ: Here is how much you could have made with Litecoin in a year