As the demand for cryptocurrencies surges worldwide, startups are looking for creative ways to attract crypto enthusiasts. In a first, a company called Worldcoin has said that it would scan people's eyes and reward them with digital currency.

Does this sound like a plot of a science fiction (sci-fi) movie to you? But, trust us, we are not joking, and this is a true story. Sam Altman, an American entrepreneur, and the chief executive officer of OpenAI, said that his new startup would hand out free digital currency to people who verify their accounts by taking an iris scan.

Worldcoin is believed to have already raised US$ 25 million in funding from investors, which include Reid Hoffman, the billionaire co-founder of LinkedIn and venture capital firm Andreessen Horowitz.

What is Worldcoin? A sci-fi or real cryptocurrency?

The startup's co-founders are Max Novendstern and Alex Blania. Worldcoin aims to launch a cryptocurrency distributed fairly across the world and become a collectively owned global currency.

Also Read: Is Rocket Bunny crypto real and is it a safe investment?
Alex Blania reportedly said that the startup aims to expand the reach of cryptocurrencies as it can widen the boundaries of the economy.

How will the Worldcoin cryptocurrency work?

The startup has designed a chromatic sphere called 'The Orb', and it will scan people's eyes to determine whether someone is a unique human. Worldcoin has reportedly sent these Orb devices to 12 countries, and testers will get users to scan their iris.

The Orb's scanned images are encrypted and become a unique code. As a result, the original data gets deleted and protect users' privacy. Once the process is completed, users will get a free share of Worldcoin's cryptocurrency. 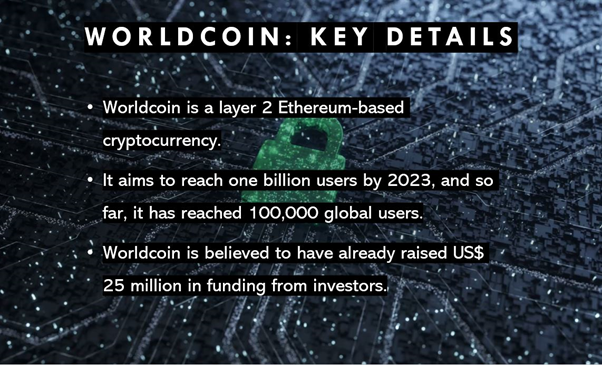 Worldcoin aims to reach one billion users by 2023, and so far, it has reached 100,000 global users. The company reportedly adds 700 users per week.

Worldcoin is a Layer 2 Ethereum-based cryptocurrency and has the security of the Ethereum blockchain. The startup reportedly chose Ethereum due to its developer network and hopes that the network will adopt Worldcoin.

An Allied Market Research report notes that the cryptocurrency market was valued at around US$ 1.49 billion in 2020, and it is estimated to reach US$ 4.94 billion by 2030 while registering a compound annual growth rate of 12.8 per cent.