At the time of writing, Bitcoin was down by about five per cent, Ether declined by 6.6 per cent and the market was trading in the red. The decline in prices of cryptocurrencies could be due to Virgil Griffith, who has pleaded guilty to helping North Korea avoid US sanctions by using blockchain technology.

Here is why RAD is up between Virgil Griffith guilty pleas

Mr Griffith, the researcher of Ethereum Foundation was arrested in 2019 for attending the Pyongyong blockchain conference. The US authorities have alleged that the researcher has helped North Korea to deploy blockchain technology and sidestep the sanctions.

The prosecutors have claimed that his trip to North Korea was not approved by America and his presentation at Pyongyong was equivalent to giving services to the isolated country. Mr Griffith's trial was set to begin on September 27, however, he pleaded guilty to aiding North Korea.

Amid the falling prices, one cryptocurrency has stood out and it is gaining the attention of crypto traders.

It is an open-source network for software collaboration. According to the project's website, Radicle is a community-based platform and enables its users to collaborate on code without a need of a third party.

Radicle is harnessing Ethereum’s power and that of decentralized finance (DeFi) infrastructure to allow developers to own their collaboration infrastructure.

According to CoinMarketCap, after Radicle launched in beta mode in December 2020, over 1,000 projects were published on the platform, and it gained interest from across the Web3 ecosystem. 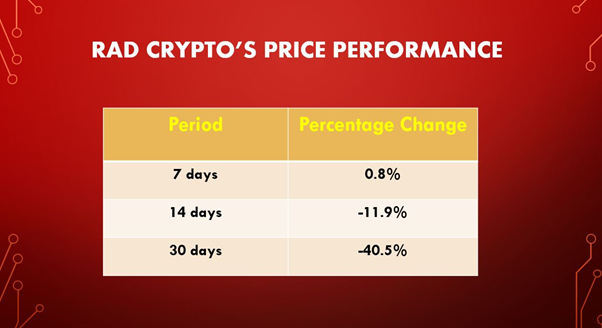 If the RAD crypto enters a bullish zone, it could reach US$ 13 per token by the end of this year.

The cryptocurrency market is extremely volatile, and any significant world event affects the crypto industry. Therefore, it is important to research before investing.