Cryptocurrencies rarely find backing from governments and regulators. Though El Salvador legalized the world’s largest crypto Bitcoin in 2021, major economies like the US and China are said to be working on their own version of Central Bank Digital Currencies (CBDCs).

If China’s ban on cryptos wasn’t enough, the news that India, a major emerging economy, is set to make crypto trading illegal has upset crypto investors leading to prices of top tokens crashing.

No, India hasn’t yet banned blockchain-based digital currencies, but a proposed bill may intend to do so.

As the Indian Parliament meets for its winter session, the Cryptocurrency and Regulation of Official Digital Currency Bill, 2021, will be tabled for discussion. According to the documents available in the public domain, the bill is listed with a synopsis ‘the bill also seeks to prohibit all private cryptocurrencies in India’. This single sentence was enough to upset the crypto industry, and major currencies like Bitcoin and Ether fell sharply in local exchanges.

The brief summary of the bill also mentions that ‘certain exceptions’ can be allowed.

This statement injects a degree of speculation. Will the Indian government not go for a blanket ban on all cryptos? Will it allow major and relatively more stable cryptos like Bitcoin and Ether to operate? Will it only ban trading in hyper-volatile altcoins like Dogecoin? These are only guesswork until the bill is actually tabled.

To understand the difference, we can look at one other industry operating in India – liquor. Liquor sale in most of the Indian states is regulated. It means manufacturers and retailers need license to operate. In a few Indian states like Prime Minister Modi’s home state Gujarat, liquor is prohibited. Any sale of liquor is a criminal offence in these states.

Most analysts say that India might go only as far as regulating the cryptocurrency space. This could mean that local exchanges may need to register with a regulator like SEBI, and all capital gains accruing from trade in cryptos will fall under the tax ambit. 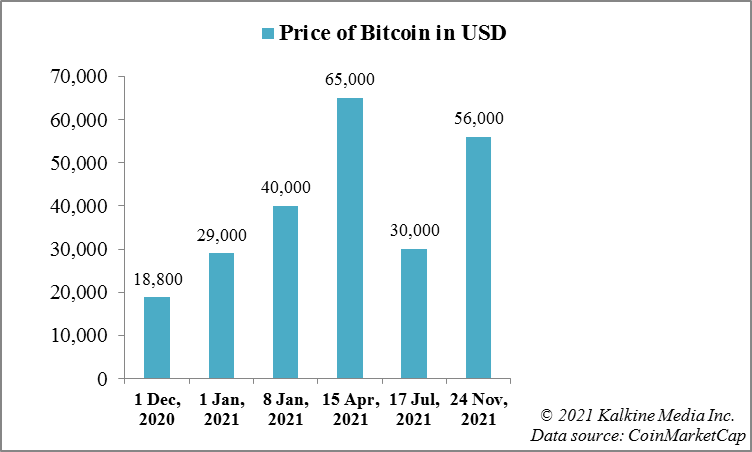 Prohibition of cryptos in India would lead to tens of millions of investors in a quandary. A few exchanges in India have become big corporates and employ a large workforce, and a ban on crypto may lead to their closure.

Lately, the ruling party of India, including the Prime Minister, has called out the abuse of cryptos that can pose a threat to national security. A parliamentary panel recently met to discuss the subject with all the stakeholders including representatives of exchanges. It was reported that regulatory oversight was picked over any blanket ban on cryptos.

Also read: Is India about to ban cryptos? Here’s what might happen

India’s banning of cryptocurrencies can deal a body blow to the crypto industry. Prices of any crypto asset are subject to its demand and supply, and Indians have played a big role in demand. Besides, India is a formidable emerging economy and a part of multi-lateral groupings including the UN and G20. After China, if India decides to prohibit cryptos, it can put pressure on other big economies to make their stance clear on these volatile assets.