But two software engineer friends – Billy Markus and Jackson Palmer – had a unique idea and they ended up making a meme that is now worth US$41 billion – surpassing many large cap companies listed on global stock exchanges.

In 2013, Mr Markus and Mr Palmer, set out to create a parody of the cryptocurrency. Deemed worthless, it was supposed to be traded just for fun. 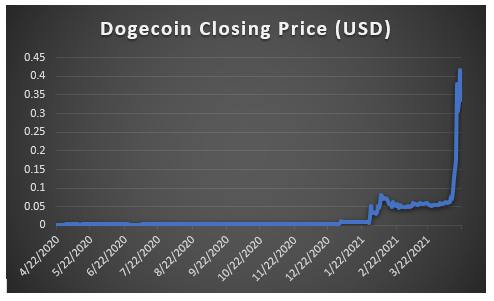 Earlier this year, Dogecoin received a ringing endorsement from one of the richest businessmen in the world – Elon Musk. “Dogecoin is the people’s crypto,” Musk wrote on the microblogging website – Twitter – on 4 February 2021. Since then, Mr Musk has been constantly tweeting praises about the Dogecoin.

This surely helped the prospects of the cryptocurrency.

The surge in the Dogecoin is also being linked to the news that Kronos, a Californian air purification technology firm, has purchased about 600 million Dogecoin Cash. Even as two cryptocurrencies are linked, Dogecoin Cash and Dogecoin are not same.

While Dogecoin is a cryptocurrency – or so to say, Dogecoin Cash calls itself a "community-driven project created by a group of passionate Dogecoin enthusiasts."

Also Read: Cryptocurrency Boom: Blockchain Stocks to Look for In 2021

However, started as parody, many experts are worried about the rally in the Dogecoin. Some suggest that the Dogecoin enthusiasts might be following “the greater fool theory”. According to this theory, any investment at any value is a good investment, till you find a “greater fool” to buy it at even higher prices.