In the past few years, bitcoin has often been referred to as “the new gold”, because its value changes more like that of commodities than fiat currencies. This is also why more shareholders have taken an interest in cryptocurrency, as they tend to go up in price during economic and political crises, rather than inflate as real currencies do.

MUST READ: What is a cryptocurrency and how to use it?

According to Mr Nigel Green, the Chief Executive Officer of deVere Group, bitcoin will restore currencies as we know it, and replace gold within the next generation.

Mr Green believes that Bitcoin prices will surge following the uncertainty surrounding the US elections and the ongoing Brexit situation.

The generation of many differences

Millennials and Gen Z have exhibited different spending habits than their parents and grandparents. As they are more tech-savvy and digital-oriented, it is believed they will be more interested in digital assets and stay away from the traditional market exchange.

The most appealing thing about bitcoin is its decentralised transactions and fixed supply. Even though digital currencies like bitcoin can be on slippery ground, they have been more attractive to young investors.

MUST READ: Bitcoin for Beginners: 5 things you need to know

Mr Green also added that bitcoin has already earned the title of digital gold, and due to the pandemic, younger generations have realised how weak real currencies can be. Bitcoin, unlike real currencies, cannot be affected by any decisions that central banks make, but rather depend on different factors.

Can bitcoin be the new safe haven?

According to a cryptocurrency expert, bitcoin is a relatively new currency which makes it unattractive for a section of investors. While gold has been present since ages, cryptocurrency, including bitcoin, is a relatively new concept. However, experts believe the market is evolving, and there is significant scope for bitcoin. With the inherent deflationary traits, bitcoin might be the new safe haven.

However, it is advised that investors must be aware of the differences these two assets offer, especially when it comes to their portfolio requirements. That difference could be the turning point as investments are getting digital. 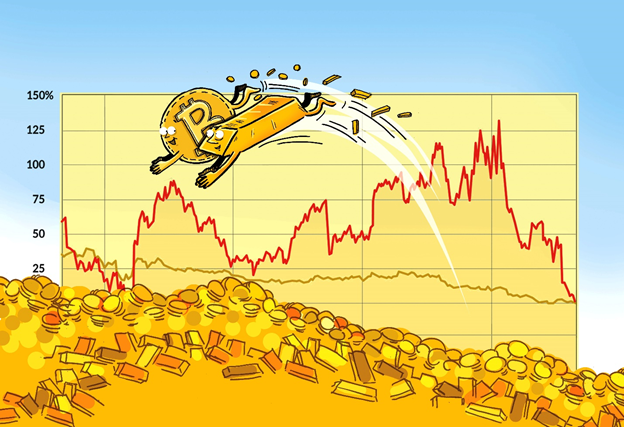 Gold has been the most popular commodity for more than a thousand years. When learning about money history, gold was one of the first currencies used for trading. But now, many years later, is it still as relevant?

LISTEN TO: Looking At Gold As A Safe Haven

While some experts opine that bitcoin might replace gold, others are more inclined towards gold. They believe that the yellow metal has a long history and has been accepted across the globe. According to some experts, bitcoin would have been considered a real competitor to gold if it existed for as long.

Another challenge that gold specialists mentioned was that bitcoin had not been widely accepted, whereas all cultures in the world understand the value that gold brings. They are aware that bitcoin and other cryptocurrencies are worth a lot of money nowadays, but they are digital assets, and that might not give certainty to the older generations.

The physical aspect of gold could be the turning point when it comes to choosing what to invest. Given gold’s history, such as being used in wars as a bribe in case of trouble or for making jewellery, it appears more attractive because it looks valuable and expensive. The mentioned aspect might be the biggest challenge bitcoin will face in the transition process.

Several experts have been discussing if bitcoin will ever replace gold. However, some think that the emergence of digital gold could steal the crown in the end.

The head of one of Australia’s corporate advisory businesses predicted the governments would probably look into different ways of storing values in the future, as they tend to print more money to boost exports and economic expansion.

He added that bitcoin could be too unstable, and its price can drastically change due to events that cannot be predicted. So far, nothing has proven that bitcoin will ever get the sense of stability and weight that gold has, the head of the firm opines.

LISTEN TO: The Fuelling Demand For Gold

It is hard to be sure about what will happen with bitcoin and other cryptocurrencies, as they have shown to experience both drastic increases and decreases. One thing is for sure – bitcoin does look like it could become more accepted as younger generations are more oriented to digital aspects.

For ages, gold has been a sign of wealth and will probably remain the same indefinitely. However, experts are aware that trading markets are evolving and that digital assets will become a significant phenomenon in the future.

MUST READ: How has COVID-19 affected bitcoin price?