Bitcoin vs. Ethereum – All you must know before 2021 ends

Two Cs ruled 2021 – climate change and cryptocurrencies. Both these subject-matters were discussed by the ruling governments. China committed to reducing its greenhouse gas emissions and cracked down heavily on cryptos. In the US, President Biden pledged ambitious emission cut goals, and from the Senate to the Fed to the SEC, cryptos were on the discussion table everywhere.

But today, as we come closer to bidding goodbye to 2021, it is not about climate change vs. cryptos. This debate can be left for a later day. As we enter 2022, we have to understand that Bitcoin and Ethereum are two different segments within the cryptocurrency universe. And 2022 can be that year when Ethereum topples Bitcoin to become the world’s biggest crypto, at least a few analysts are saying so.

Satoshi Nakamoto, the creator of Bitcoin, and other early developers involved in the project envisioned Bitcoin as becoming a legal medium of exchange in coming years.

To these developers, the blockchain technology was the future of finance. Blockchain could be a complex tech to understand. It is best to view it as a network where power is not centralized, but distributed among all participants. For example, the Facebook app that runs on a smartphone gives administrative rights only to the company, but decentralized apps give such rights over governance to users.

Bitcoin currency was produced by the process of mining on blockchain. This way it differed from regular fiat currencies whose supply is controlled by central banks. Bitcoin came with a promise – similar to how the internet changed the way people interacted, purchased things, Bitcoin was supposed to move currency from its traditional sphere to completely internet-driven, from production to supply.

Ethereum wasn’t conceived as a currency. It is a blockchain that provides enough space to developers to deploy their decentralized solutions – which can range from exchange platforms to games – and join the blockchain wave.

Ethereum named its native token Ether. In fact, the debate should be Bitcoin vs. Ether (not Ethereum). In Ethereum’s blockchain, Ether acts as a medium of exchange. Developers pay fee for using the services in Ether token. This basically means that Ether has no use case outside of Ethereum’s blockchain. But yes, if Ethereum continues its winning streak and can limit the expansion of rival blockchains like Solana, Ether will continue to have a definite utility.

Ethereum’s blockchain is famous, widely adopted, which is why Ether could outshine Bitcoin’s growth in 2021.

A few countries banned crypto mining in 2021. The sole reason behind this move was excessive energy consumption that was even called out by a major crypto influencer, Elon Musk. 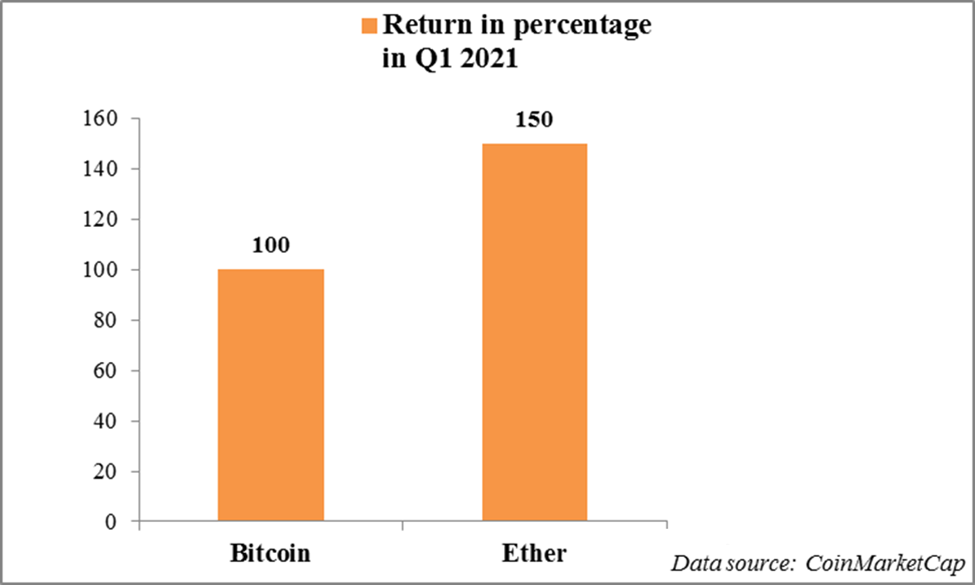 This can be a major theme that could decide the trajectory of cryptocurrencies in 2022. Both Bitcoin and Ethereum use the so-called ‘proof-of-work’ protocol for mining. In 2021, Ethereum underwent a major overhaul and took a step toward the ‘proof-of-stake’ consensus, which is said to be less energy intensive. If the claims have some real value, Ether could have an edge over bitcoin, at least when it comes to power consumption.

Solana, a blockchain competing with Ethereum’s hegemony, has claimed that a transaction on Ethereum uses 692,820,000 Joules, whereas one Solana transaction uses just 1,837 Joules. Such things would make the crypto world more interesting and competitive in the coming year.

But if there is one segment where Bitcoin likely has virtually no competition from any crypto, it is in the legal tender space. Countries like El Salvador are looking to lower their remittance costs by adopting Bitcoin as a legal medium of exchange. The ‘Bitcoin city’ in El Salvador is something that Ether or others may never reproduce. If more countries, regardless of the diplomatic sway they hold in the international community, adopt Bitcoin in the coming months, this would become a different game altogether.

Bitcoin and Ethereum -- hand in hand

Why talk about Bitcoin vs. Ethereum when they can co-exist?

Many analysts believe that only a handful of cryptocurrencies will survive in the long run. At least two, Bitcoin and Ether, are better placed than others. Bitcoin has S&P Dow Jones indices tracking its value, ETFs in multiple jurisdictions, and it is now legal tender at least somewhere in the world. Ether too has indices and ETFs, but its biggest strength is its utility within the Ethereum’s ultra-popular blockchain.

It can be said that the long-term sustainability of the cryptocurrency universe relies much on Bitcoin and Ethereum’s resilience in the wake of criticism and crackdowns. Both have a substantial share in the total market cap of all cryptos combined, and this market dominance makes them a close watch in 2022.

Bitcoin and Ethereum are fundamentally two very different projects. One envisions a place in legal tender space, while the other wants to make the blockchain technology more accessible to developers. Both can, however, co-exist, though the fight for the top position in cryptos would further heat up in 2022.