Memes are no longer just for sarcasm or a funny take on something. They have spawned crypto tokens, and a few have multi-billion-dollar market capitalizations. 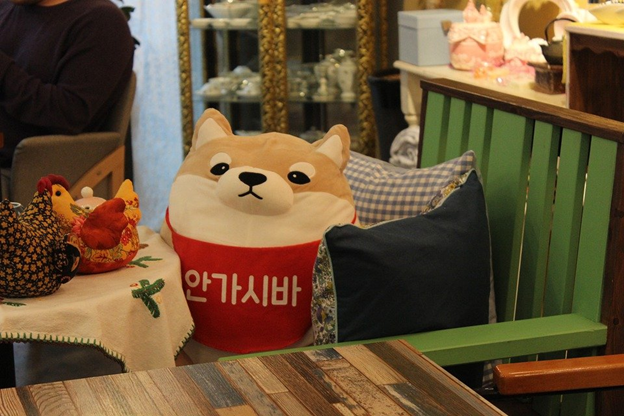 Yes, we are talking about Dogecoin (DOGE), and its biggest rival Shiba Inu (SHIB), which has gained 50 per cent in a matter of 24 hours. But as 2022 approaches, will the momentum spillover and produce gains for investors in other meme coins? The surge in the values of DOGE and SHIB compels us to look for meme tokens that might do wonders in 2022.

Let’s find out about a few.

If you thought Dogecoin was the only meme cryptocurrency linked to Elon Musk, here’s one that even borrows his name.

Not much is known about the Dogelon Mars (ELON) crypto project. The developers have mimicked filmmaker Christopher Nolan’s sense of mystery that revolves around interplanetary missions and humans becoming multi-planetary beings.

The project’s website claims to be working toward taking human settlers to Mars, with ELON acting as an “interplanetary currency.” ELON is said to be a fork of Dogecoin, and ‘Dogelon’ is claimed to be the capital city of planet Mars. The project would be helping people who are scammed into buying crypto tokens that have no value. It claims to be sending ELON tokens to the victims of scams.

On its website, Dogelon Mars’ developers claim to have donated half of the supply of ELON to Vitalik Buterin, the co-founder of Ethereum (ETHER).

According to CoinMarketCap, ELON has a circulating supply of nearly 548 trillion tokens. Dogelon Mars’ market cap is nearly US$274 million as of now.

Samoyed is a dog breed that borrows its name from a native tribe in Siberia. This sounds familiar to the Shiba Inu breed of Japan. Although both Samoyedcoin and Shiba Inu invoke dog breeds, they have some differences

SAMO, unlike SHIB, has a Solana connection. Solana’s blockchain has become a formidable competitor to Ethereum’s. The former claims to have better scalability. It uses proof-of-history and proof-of-stake protocols to enable creation of decentralized apps or DApps.

SAMO is a meme crypto of Solana. It claims to be working toward making Solana more recognizable as most of the backers of Solana rely on its “highly technological” attributes. SAMO is said to be taking it to amateur crypto enthusiasts.

SAMO has found its share of takers and has a market cap of nearly US$137 million as of now. For a fun and meme cryptocurrency, this market cap is no mean feat. The circulating supply is nearly 2.7 billion SAMO tokens.

It is trading at nearly US$0.05 apiece as of now and has gained nearly 250 per cent over the last seven days.

If it is a common complaint that cryptocurrencies lack utility commensurate to their prices, the MONA crypto may have proved critics wrong. It was reported by the news media in Japan that one holder of MonaCoin purchased a piece of land using it in the city of Nagano.

Not much is known about the MonaCoin project, and it claims to be a decentralized network. MonaCoin is a pretty old meme currency, started in 2013 based on a cat-like creature. MonaCoin is predominantly used in Japan by crypto enthusiasts.

MonaCoin has a market cap of nearly US$97 million as of now, with a circulating supply of nearly 65 million MONA. MONA is priced at nearly US$1.4 as of now. 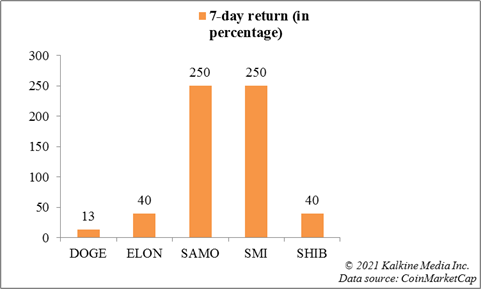 The SafeMoon Inu project claims to be blending gaming with meme cryptocurrency.

The developers are coming up with ‘SMI Play’, a gaming platform. The project sounds a little like the Axie Infinity crypto game that has ‘Axie’ creatures with non-fungible token (NFT) attributes. The SafeMoon Inu crypto game may have similar NFT features and reward points for users.

SafeMoon has a relatively low market cap of nearly US$25 million as of now. It has a circulating supply of 1 trillion SMI tokens. The price of one SMI is nearly US$ 0.000026 as of now. It is up almost 250 per cent over the last seven days.

If Bitcoin (BTC) is the king of all cryptocurrencies, Dogecoin can be treated as the king of meme coins. The reason is its very high market cap of nearly US$35 billion, which as of now places it in the top-ten list of cryptos by market cap.

Elon Musk has tweeted about DOGE, claiming to be working with its developers.

Dogecoin also has found its utility in the tipping universe where users of Reddit and Twitter are rewarded for their content using DOGE. The meme token uses the ‘Scrypt’ technology. Even in 2022, DOGE may lead the meme crypto universe gains as it is still priced at nearly US$0.26. According to experts, retail investors still prefer low-priced cryptos over highly-priced ones.

Meme cryptocurrencies may become even bigger in 2022 considering the latest surge in the value of Shiba Inu. Though DOGE and SHIB are the two most popular meme cryptos, others are fast catching up. The remaining four mentioned above may continue their winning streak even in 2022. Bitcoin reclaiming its April high, shows the steam in the crypto world.