90% Bitcoins mined: What does the future hold for BTC?

The crypto king had been experiencing a bearish path of late. According to CoinMarketCap data, Bitcoin currently trades at US$47,981.51, down from a high of ~US$68,789.63, it hit in November. At present, the largest crypto, Bitcoin, has only gained 110 % in a year, much less than many altcoins that have seen huge gains.

However, in the crypto world, Bitcoin is the largest and most resilient cryptocurrency. In December, BTC reached a new milestone with the announcement that 90% of all its 21 million Bitcoins had been mined.

Before the story moves further, Let's take a look at the Bitcoin mining so far. 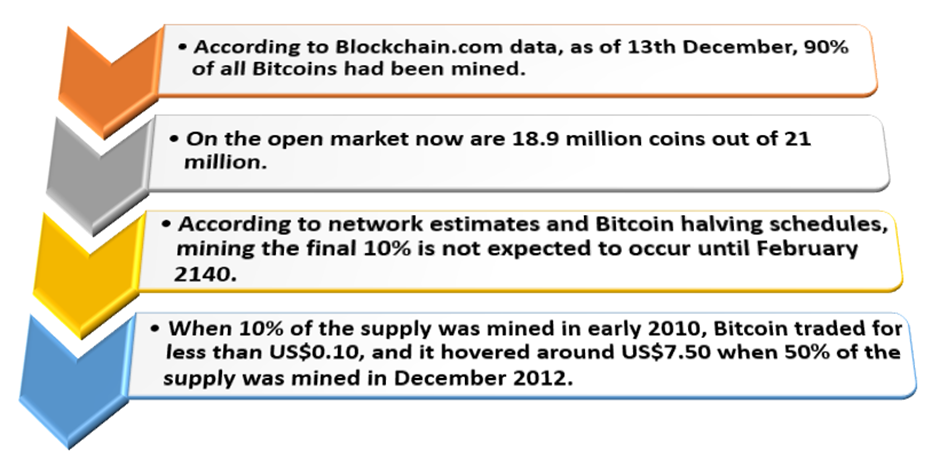 What does it mean that 90% of Bitcoins have been mined?

Bitcoin creator Satoshi Nakamoto forecasted that there would be 21 million coins when he launched Bitcoin in 2009.

The logic for tying Bitcoin to a fixed supply was to develop a mechanism that would continuously drive Bitcoin's price. However, as Bitcoin became more popular, the number of miners accelerated, resulting in faster-than-expected Bitcoin mining.

Meanwhile, it is anticipated that not all 21 million Bitcoin will be available for purchase on the open market. Crypto analytics firm Chainalysis reveals a loss of 3.7 million Bitcoins due to various reasons including death to misplacing private keys.

What does halving schedule for Bitcoin imply?

Due to the halving schedule, even though 90% of Bitcoins have been mined, the remaining supply will take exponentially longer to mine.

Let’s take a look at the reasons why Bitcoin will be fully mined by 2140.

Recent Article: Elon Musk’s cryptic tweet: Is he serious about quitting his job?

With the supply shortage and growing acceptance of BTC globally, it is currently the number one crypto with respect to market capitalisation. Hence, though many cryptos will emerge in the crypto world, it seems Bitcoin will be difficult to be replaced soon.