5 ways in which Evergrande crisis can impact cryptocurrencies

As China’s property giant Evergrande inches closer to an official default – no, it hasn’t yet defaulted – there can be repercussions for the cryptocurrency market.

It may be said that Evergrande is a player in an entirely different market that runs on fundamentals like revenue from operations, any collapse can likely impact the unrelated crypto investment space, which is more about sentiments than fundamentals.

Below are five ways in which Evergrande can impact cryptocurrencies.

Also read: Explained: What is Evergrande crisis all about?

Not all crypto assets are volatile like Bitcoin or Dogecoin. Bitcoin has become an asset the price of which relies on demand and supply forces. In mid-2021, factors like China’s crackdown and apprehensions over excessive power usage dragged BTC price to under US$30,000.

In contrast to this, stablecoins, which are claimed to maintain 1:1 reserve with assets like real-world cash and commercial paper, escape price volatility. These stablecoins are used as a medium of exchange to buy and sell other cryptos. For example, Tether, which has a market cap of over US$70 billion as of now is a stablecoin used in lieu of fiat currencies to trade cryptos on any exchange.

Evergrande’s default -- for now, it has paid the interest totaling over US$148 million just before the grace period was about to end -- on its December due date for US$255 million interest payment could trigger a global economic selloff.

Evergrande’s impact on cryptos in the past

In September 2021, when the news of Evergrande’s inability to repay its liabilities on due date broke, the impact was immediately felt in the crypto investment space.

Between September 18 and September 22, Bitcoin fell from nearly US$48,000 to almost US$41,000. This sparked a debate that Bitcoin’s reaction to the Evergrande crisis indicated it cannot be termed digital gold. Gold, for ages, has remained a safe haven for investors, and any correction or crash in the market or an economic crisis usually inspires investors to buy gold. 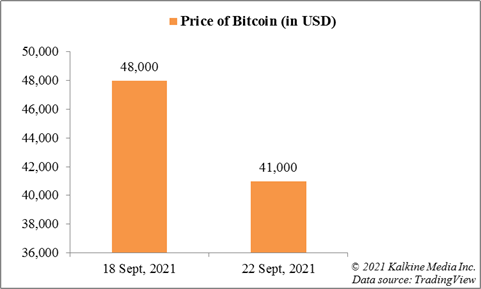 That Evergrande has officially defaulted on its interest payment was reported by some new media. But the real estate behemoth of China dodged the default, and news emerged that creditors have been paid.

The concern is that the embattled company has yet to repay more than US$300 billion, of which US$19 is said to be liabilities on account of international market bonds. Although the Chinese government has been calming investors’ nerves, the Fed has lately said that China’s property market poses risks to the market. For now, retail investors are in the driver seat in both share market as well as cryptos. In a scenario of a wider market selloff triggered by Evergrande, even crypto supporters may be hit by negative sentiment.

Regulators may jump in

A Senate committee lately discussed cryptocurrencies in a hearing titled ‘Cryptocurrencies: What are they good for’. Senators including Sen. Elizabeth Warren raised concerns about the proliferation of the space and how it is escaping regulations. Sen. Warren has also written to government officials on the urgency of regulating the crypto investment space, which may otherwise have repercussions for the broader financial space of the US.

An Evergrande default in future may prompt cryptocurrency critics to put more pressure on regulators. If that happens, Bitcoin and other cryptocurrencies, which are enjoying a bull run over past few weeks, may feel the same heat they felt during the China crypto crackdown.

Lately, Apple’s Tim Cook revealed his personal crypto holding secret. But he is not the only one. Elon Musk has been a staunch backer of cryptos, and he has tweeted about Dogecoin and other meme tokens. Jack Dorsey has gone as far as claiming that Bitcoin could be the ‘native currency of the internet’.

Elon Musk’s Tesla was a loser in previous few trading sessions, and analysts blame it on Musk’s tweet in which he sought a vote on his US$20 billion Tesla holding. A few major Tesla investors have also exited the stock. In the event of Evergrande’s crisis turning into a major global economic upheaval, influencers like Musk and other may steer clear of issuing any impulsive advices on social media.

For now, Evergrande has escaped an official default. Next due date for interest payment is in December, and the market will closely watch the event. Stablecoins like Tether are vulnerable as a market upheaval will impact the commercial paper space, which these hold as reserves. A broader market selloff is likely to have a negative impact on retail investors in crypto space.