Crude oil prices jump nearly US$5/bbl on Wednesday as the European Union outlines its plan to ban Russian oil imports, raising concerns related to future market supplies. The prices also extended their gains on Thursday at the start of the Asian trade.

The fear of future supplies has weighted the concerns related to lower demand in China amid prolonged lockdowns.

The prices of both oil benchmarks tumbled by more than 2% on Tuesday due to lower energy demand in China amid ongoing COVID-19-related lockdowns.

Crude oil prices tumbled earlier in the week after China stated that the country’s economy contracted for a second month to its lowest since February 2020 because of COVID-19 lockdowns based on the factory activity data, released on Saturday.

Both crude oil benchmarks have risen steadily in the last two months after Russia officially announced Ukraine's invasion. Until now, European Union has been reluctant to fully dodge Russian O&G imports, and its current plan still does not suggest a full ban for all EU members. 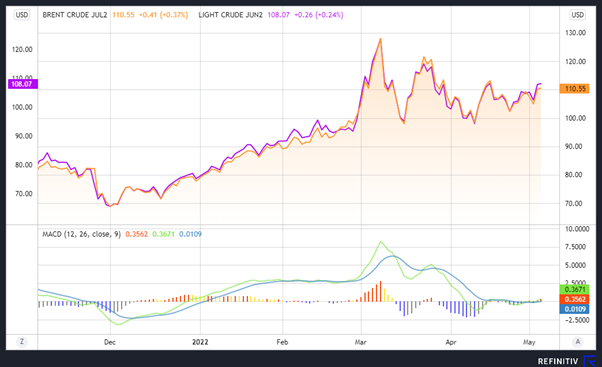 On Wednesday, European Commission President Ursula von der Leyen proposed a phased oil embargo on Russia within six months and refined products by the end of 2022.

However, Hungary and Slovakia will be able to continue buying Russian crude oil as they are heavily dependent of Russian oil.

Russia could offset the loss of one of its biggest customers by selling its petroleum products to other countries including China and India, which doesn’t stop buying from Russia.

Crude oil prices gained nearly 5% on Wednesday after falling more than 2% on Tuesday. EU proposed new embargoes against Russia including a ban on its crude oil imports.