Energy stocks are related to companies that are engaged in energy-related businesses like oil, electricity power generation, refining, etc. They are the stocks whose main business is the production or sale of energy.

Amid this backdrop, let’s have a look at the performance of 5 NZX energy stocks- 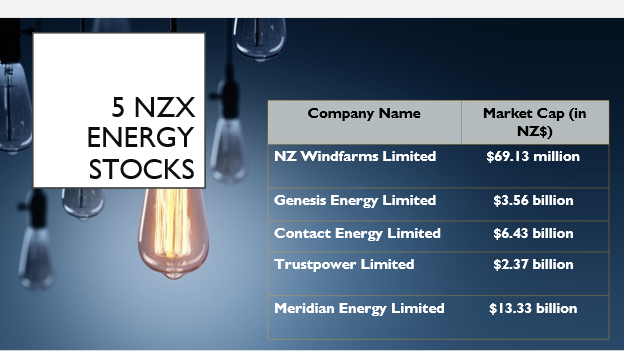 On 2 September, NZ Windfarms, the owner and operator of wind farms, announced certain governance modifications. According to the firm, John Southworth, the Chair and Director, will resign from his position at the ASM in October, and Christine Spring will be named Interim Chair for the Company if all shareholders agree.

NWF posted the second-highest net electricity revenue of $9.7 million in FY21 and sustained solid results during the period. It announced a final dividend of 0.45 cps due to be paid on 22 September.

Genesis, an electricity generation company, delivered an EBITDAF of $358 million for FY21. It invested $27 million to use the Fixed Price Option to fulfil its carbon commitments and an arbitration ruling that led to $33 million in costs.

The Group reported that in August this year, its client business had sold 436 GWh of mass market energy and gas, compared to 450 GWh in August 2020.

Trustpower announced that the national storage rebounded in the first quarter of 2021 in its quarterly operating report.

TPW results revealed that 98% of internet subscribers have switched to fast- or medium-range plans, with fibre connections accounting for 82% of all broadband connections.

TPW also stated that the next-generation business would be called Manawa Energy Limited, when the conditional sale of its retail business is completed.

Electricity producer, Meridian Energy, provided its monthly operating report for August. The Group’s total monthly inflows in August 2021 were 161% of the historical average while its South Island storage rose 139% of average by 10 September 2021.

New Zealand is on a path to switch to clean renewable sources and achieve the zero-emission target by 2050.