How does Canada plan to achieve net-zero emissions by 2050?

To tackle the adverse effects of climate change impacts, the government of Canada is focusing on achieving net-zero emissions by 2050. To meet this goal, it will need support from many parties, including businesses, provinces, territories, Indigenous peoples, and more. In this article, we will learn how Canada seeks to achieve its net-zero emissions goal by 2050.

Through various actions, including planting trees and technologies implementation, the government of Canada is focusing on achieving net-zero emissions by 2050.

To meet this goal, Canada has joined more than 120 countries such as other G7 nations, and various provinces and cities, including Vancouver, Newfoundland, and Labrador, who have been already focusing on their commitment towards net-zero goal by 2050.

What is Canada’s plan?

In February 2021, the Government of Canada incorporated the Net-Zero Advisory Body (NZAB) that focuses on providing independent advice to the Minister of Environment and Climate Change who is supporting Canada to reach the net-zero target.

The government of Canada has also introduced the C$ 8 billion Net-Zero Accelerator Fund to help large emitters to lower their emissions.

Also read: What is Canada’s Health Portfolio and its role in healthcare?

What is the Canadian Net-Zero Emissions Accountability Act?

The act has incorporated the 2030 Emissions Reduction Plan as Canada’s Nationally Determined Contribution (NDC) under the Paris Agreement to lower emissions to 40-45 per cent by 2030 from the 2005 level.

The Canadian Net-Zero Emissions Accountability Act has also included a requirement for setting national emissions reduction targets for 2035, 2040, and 2045 in advance.

Each emissions reduction plan needs to include the following details:

What is Net-Zero Advisory Body?

The Net-Zero Advisory Body was launched by the Minister of Environment and Climate Change in February 2021. The Advisory Body has the mandate to advise the minister regarding meeting its net-zero emissions goal by 2050.

The Canadian Net-Zero Emissions Accountability Act is responsible for incorporating up to 15 members as an independent net-zero advisory body who will give advice to the government and will engage with Canadians to discover the most efficient and effective pathways to achieve net-zero emission goal.

Also read: How do Heat Alert and Response Systems (HARS) work in Canada?

What is Net Zero Accelerator (NZA)?

The NZA initiative supports the net zero goals of Canada and focuses on offering up to C$ 8 billion for projects that will empower Canada to lower its domestic greenhouse gas emissions.

By investing in projects that have the potential to reduce greenhouse gas emissions, Canada will achieve the following goals. 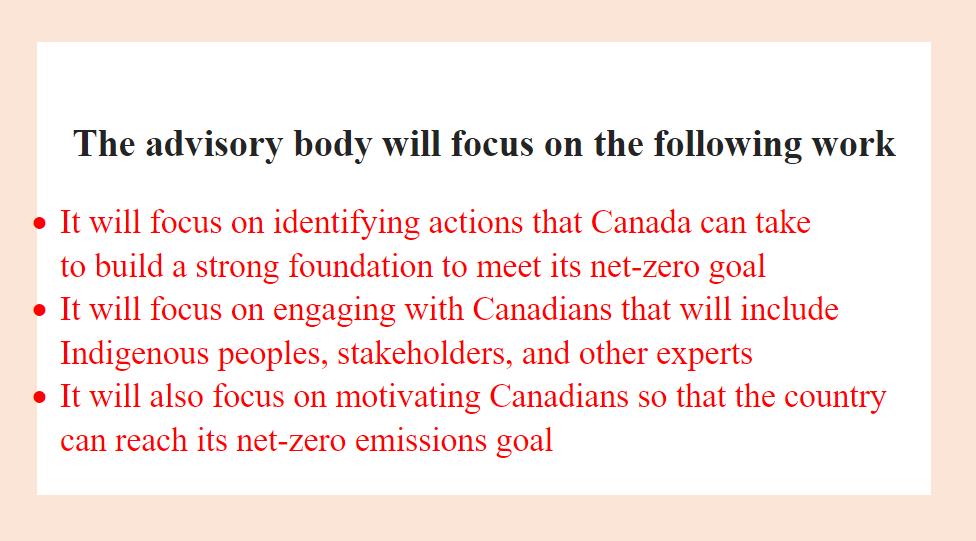 Canada wants a safe and secure future where generations can experience clean air and a healthy community. So, to achieve a clean and healthy future it needs to take immediate and effective action on climate change that imposes a threat to the health and economy.