What is a Tsunami? 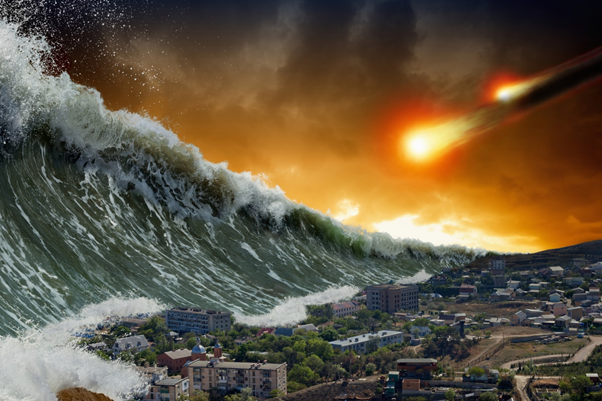 Tsunamis are massive catastrophic waves caused by underwater volcanos and earthquakes. These waves travel in the outward direction from the source at speeds of up to 500 miles per hour. The speed of Tsunami waves is directly proportional to the depth of the ocean rather than the distance from the source location. Tsunamis can cause huge losses to life and infrastructure.

What are the causes of Tsunami?

Tsunamis are caused by underwater geological events that occur at the tectonic plate boundaries. There are three main causes of a Tsunami. Let us discuss them one by one. 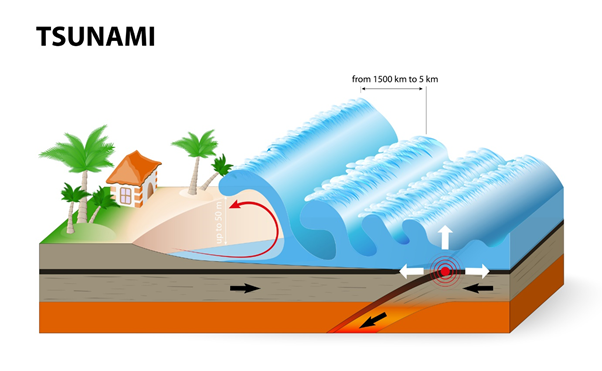 How are Tsunamis different from regular waves?

What is the size of a tsunami?

Where do most of the tsunamis take place?

Most of the tsunamis occur in the Pacific Ocean because of a large number of earthquakes at the plate margin of the Pacific Ocean basin known as the "Ring of Fire". Around 90% of the world's total earthquakes take place along the Ring of Fire. A number of subduction zones are associated with the deep-sea trenches offshore of Indonesia, Japan, Alaska, and Chile. The region produced a number of earthquakes that triggered various tsunamis and devastated significant human lives in the Hawaiian Islands.

Where have the biggest tsunami disasters occurred?

A number of tsunami events took place in the past and caused significant loss to man and artificial infrastructure. In 2004, around 225,000 people in fourteen countries lost their lives due to the tsunami in the Indian Ocean. It was a powerful earthquake that was triggered near Sumatra islands that caused waves up to heights of 100 feet. The second most devastating event took place in the year 2011 in Japan due to the underwater earthquake on the country's eastern coast. The earthquake triggered waves of up to 133 feet in height and caused 15,000 deaths. The event also damaged Fukushima nuclear plant.

The third most devastating earthquake took place in 1964, with a 9.2 magnitude earthquake in Alaska. The event killed around 139 people, destroyed many buildings along the coastline and fired up oil storage tanks in the area.

What are the effects of tsunamis?

There are various devastating effects of tsunamis. Let us have a look at them one by one.

How are 4 NZX energy stocks faring amid Tonga’s volcanic eruption?

Why Indian PM Modi urged for global cooperation on cryptocurrencies