A surcharge is an extra charge or fee imposed on the consumer in addition to the initial quoted price of the purchased goods or service. It is considered an indirect way to pass the burden of an additional cost on the product's end-user, keeping the product's cost unchanged.

A surcharge is considered legal in a country unless specified otherwise by law.

This extra fee reflects the business’ requirement to pay for additional services or expenses either to the authorities or some other business. It is included by many industries, such as telecommunications, cable, travelling, etc. 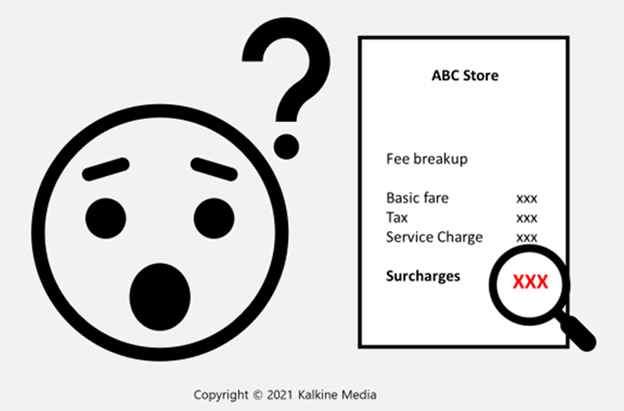 What are some examples of a surcharge?

Some of the examples of surcharge from various industries are as follows:

Banking: One of the most common forms of surcharge in the banking sector is reflected in the service of automated teller machines (ATM), known as ATM surcharges. It is charged upon withdrawing the cash from another bank’s ATM.

Hospitality: Hotels and resorts charge additional fees on the amenities and comfort (or luxury) they offer. These surcharges can include energy surcharge (passing the rising energy cost on to the customers on a per day basis), groundskeeping surcharge (it is the cost added in the customer’s total hotel bill to maintain the lawns, grounds or golf courses).

Airlines: An airline ticket primarily includes the base fare, fuel surcharge, other charges, user development fees, passenger service fee, etc. A fuel surcharge is a cost evaluated by the carrier to account for geographical and seasonal variations in the fuel prices. Fuel bills contribute a lot to the operation cost of an airline. Therefore, almost all airlines include a fuel surcharge in their ticket fares.

The airport operator also charges a user development fee from the passenger against the cost borne in developing the airport.

A convenience fee is an amount charged by the seller or service provider when the buyer chooses to pay using an electronic card rather than the standard mode accepted by the seller. This fee can be a fixed amount or vary as per the total bill.

Let us understand the difference between a convenience fee and a surcharge using an example.

If a person wishes to order food online using an application instead of going to the restaurant and picking up the food, the online application is allowed to charge a convenience fee of a certain per cent of the total bill.

A surtax is a tax imposed by the government on another tax. It is charged when the government is raising funds for a particular initiative, such as the military or health. It is different from income taxes and sales taxes as they are collected by the government to fund various programs. It can also be called a surcharge tax.

The key difference between a surtax and a surcharge is that the former is legal, and the latter is illegal in many countries. Also, a surcharge is other’s liability borne by the consumer of the service or product.

Let us discuss the comfort or advantages that ATM surcharges provide to customers and banks, even though they are assumed to affect the transaction volume and competition in the long run.

There can be some alternatives that can encourage merchants to accept all form of card payments and put a stop on applying unnecessary surcharges on the consumer. For instance:

Before executing any of these strategies, however, it is advisable to do complete market research and run a pilot project before implementing it as the permanent scheme for a business.

Belvoir, Property Franchise: Stocks you may want to add to your portfolio

Here’s why shares of Flight Centre Travel (ASX:FLT) are in focus today

Your Uber rides are now going to be costlier, here’s why

How is Zip Co Ltd. (ASX: Z1P) share placed after the recent fall?

Australian Election 2022: Why tax reforms should be a hot topic