The Russel 2000 index is an index measuring the performance of approximately 2,000 small cap American companies. The companies forming the index are weighted based on their market capitalisation. Consequently, the weights attached to the various component firms change depending on the market capitalisation held by them.

This index is operated by FTSE Russell of the London Stock Exchange Group. It was founded by Frank Russell company in 1984. The index is mostly concerned with small cap companies and is also sometimes referred to as “Russell 2K”.

It is a part of a broader index called Russell 3000, which also includes the Russell 1000, an index made up of the top 1000 American stocks. Additionally, Russell 3000 makes up for about 98% of the entire investable stock market in the Unites States.

Russell 2000 makes up for almost 2/3rds of all American stocks in the market. 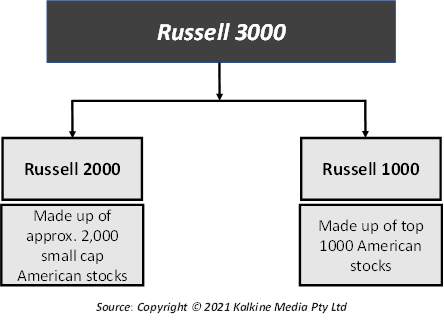 How does the index work?

The average weighted market capitalisation of a company included in the Russell 2000 index was USD 3.76 billion as of February 28, 2021. This index alone accounts for less than 10% of the capitalisation of the US stock market.

Russell 2000 excludes stocks that are trading below USD 1 along with pink sheet and bulletin board stocks. Close-end mutual funds, limited partnerships, royalty trusts, foreign stocks and American Depository Receipts are also not part of the index.

The index is reconstituted every May as stocks can quickly change categories from small cap to medium cap. Whereas, initial public offerings, if found eligible, are added quarterly.

There are various permutations of the Russell 2000 index available in the market. These permutations are formed by taking factors other than market capitalisation as the distinguishing factor.

Which companies form the Russel 2000?

Healthcare sector forms a large part of the index, followed closely by consumer discretionary and industrials sectors. Consumer staples and telecommunications sectors form the lowest share of the index.

The largest market capitalisation held within the index was USD 23.46 billion as of February 28,2021. While the same figure for Russell 3000 was significantly higher at USD 2073.854 billion.

The index is rebalanced every year on the last trading day of June. This rebalancing can alter the market by a great degree. The funds dependent on the index as well as some small-cap funds that mirror the movement of the index load up on the new entrants to the index while drop the stocks that leave the index.

Why is the Russell 2000 important?

The Russell 2000 is a popular and widely accepted benchmark used to gauge the strength of the US stock market. The index may not be as popular as its counterparts like the Dow Jones Industrial Average Index, however it is still a good tracker of the smaller companies in the US stock markets.

The index is very much inclusive and is much broader than various other indexes in the market. Investors also compare mutual funds’ performance to Russell 2000 as it a broad index and gives a fairer depiction of the entire market. Most indices fail to cover a large proportion of the market, however, Russell 2000 it covers many stocks in a single index. This makes the index less biased and less stock specific.

What are the limitations of the Russell 2000 index?

Despite its coverage of the smaller cap stocks, Russell 2000 does not include micro-cap stocks in its calculation. There are hundreds of such companies deemed too small to be included in the index. These micro-cap companies include some of the fastest growing stocks which are not factored into the index.

Additionally, only a few sectors have come to dominate the index. The index sees heavy contribution from the financial and healthcare sectors. Thus, this aspect may weigh on stocks belonging to other sectors like communications, telecommunication, etc.

How can one invest in the index?

To invest in the index, one need not buy all 2000 stocks that the Russell 2000 is comprised of. Investors can directly trade in the index through a mutual fund or exchange-traded fund that shadows the index. Examples of the same include iShares Russell 2000 ETF, Rydex Russell 2000 Fund, Rydex Inverse Russell 2000 Strategy Fund, USAA Small Cap Stock Fund, etc.

How is the Russell 2000 different from the Dow Jones Industrial Average Index and the S&P 500 Index?

Both these indexes are different from the Russell 2000 based on their composition and usage.

Here are some broad differences:

US stocks fall after GDP data

Lloyds (LLOY) & Barclays (BARC): Should you hold these banking stocks?

US stocks close higher ahead of Fed meeting

US stocks retreat for third straight day on inflation woes