According to definition, the estimated value of the company after financing from outside sources and/or inputs of capital, to the balance sheet of the Company. It refers to the approximate market value for a start-up, after the Angel investors or venture cpaitalists have completed the process. 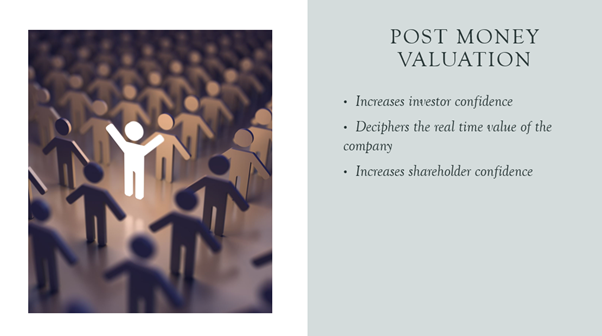 What are pre money valuations?

Venture capitalists as well as Angel investors usually use the pre money valuation to evaluate the equity amount that is required secured in lieu of capital infusing. For instance, if a company’s pre money valuation is determined to beUS $100 million, and a venture capitalist makes an investment of US$25 million, the total post money valuation for the entity shall be $125 million. The investor, in this case will have a 30% interest capacity in the Company as 35 million is worth a fifth of the totalUS $125 million.

What are some prerequisites to the above mentioned example?

The above-mentioned situation is assuming that the entrepreneur and the venture capitalist are in absolute agreement of the terms of the post and pre money valuations. There goes a lot of negotiation, in reaching these agreements, especially when the companies in question are smaller, with lesser intellectual property as well as assets. With the growth witnessed in private Companies, they get a better hold of discussions and dictation of the round valuation terms of financing, however, not all companies may reach that level.

Dilution becomes a matter of concern in consequent financing rounds of a rising private company. Cautious founders along with primary investors, assume the role of negotiating terms, as much as possible, in order to create a balance between novel equity and reasonable dilution levels. Certain additional raises in equity might consist of preferred liquidation through preferred stock. Other kinds of financing like convertible notes, stock options, warrants etc ought to be considered, in case they are relevant to dilution calculations.

What is “up round and “down round”?

What is the third kind of  valuation?

There is also a third case known as the flat round situation, this is where the post money valuation in case of the previous round and the pre money valuation for the current round or somewhat equal. Similar to the case of the down round, venture capitalists are likely to prefer witnessing an increased valuation trend before they invest their money.

Another benefit is that the investor interests for shareholders shall be held secure. this is because the viability of the institution shall be checked rigorously when any funds are received by an organization. this would minimise the risk of infiltration and leave the shareholder’s interests in safe hands. This also helps in maintaining shareholder confidence. This is because a clear picture of the performance of the companies laid out in front of all parties.

What are the essentials that need to be kept in mind during post money valuation?

The current market price needs to be considered because the corporate valuation is majorly dependent one the ongoing stock market share performances and how it builds confidence in the stakeholder’s minds.

Another aspect to be mindful of, the potential equity conversion as well as the capital structure of the company. This is because during post and pre money analysis, there are going to be several points to consider such as convertible instrument, ESOP based potential equity, which, if need be, could be transferred into equity, in case of non-compliance.

Which method is the best one for valuation?

There are different valuation methods each with their own merits and demerits, as well as set of assumptions. With the change of format, the valuation figures, and method usage tends to change. This is the reason why the time frame taken in the valuation is always subjective from case to case.

Post transactional analysis of the health of the company is known as the Post Money valuation. The company’s ability to operate depending on the fund incorporated, will be based off of this kind of evaluation. Also, these kind of valuation acts as MIS for the managerial team to determine the inevitable merits and demerits that occur due to such fund infusion.