What is Initial Coin Offering?

Commonly referred to as ICO, initial coin offering is an activity to raise capital in the blockchain and cryptocurrency industry. As the name suggests, it is similar to the concept of an initial public offering (IPO), redefined for the crypto landscape.

A company or a cryptocurrency startup seeking to build a new coin or app can raise funds through an ICO. The process is also known as the token sale.

Interested investors can make purchases in an ICO and receive a token (like shares or stake in an IPO) issued by the company. The token subscribed may offer a stake in the company or provide utility to the products and services provided by the company. 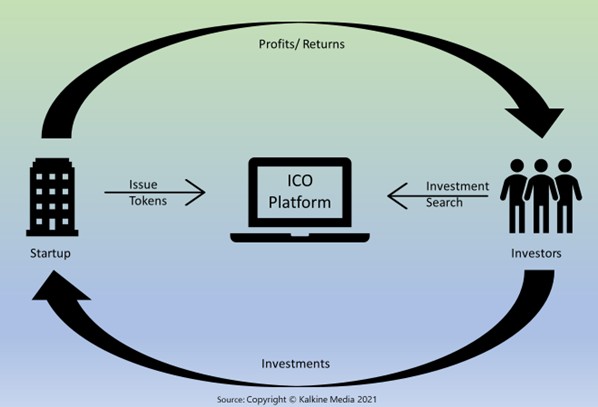 How an IPO functions

How does an initial coin offering work?

Once a crypto startup or company decides to raise funds through an ICO, the first step is to create a whitepaper.

The whitepaper outlines the project and the purpose it will serve once completed, the amount to be raised, duration of the ICO, number of virtual tokens to be kept with founders and what type of money will be accepted (digital or fiat currency).

If the capital requirements mentioned in the whitepaper are met, the amount is further utilized to pursue the project’s goals. If not, the ICO is considered as failed and the capital raised is given back to the investors.

As of May 2021, no jurisdiction has implemented any regulation specific to an ICO or tokens. However, regulators have increased their focus on these activities and ICOs are being monitored using a general regulatory regime according to the relevant jurisdiction.

The approach to regulate ICOs varies in every country. Some countries have completely prohibited them, while some are developing the regulations. For instance, according to a report published by law firm Clifford Chance, some regulations are as follows:

The Australian Securities and Investments Commission (ASIC) drafted an information sheet to provide guidance on raising funds through ICOs. The information sheet confirms the legal position of an ICO depending on how it is structured, operated and the rights offered with the token.

If the offering associated with the security offered is covered by the Australian Corporations Act, then it is regulated similarly. If it is beyond the Act’s scope, it will fall under general and the country’s consumer laws.

ICOs are subject to the US Securities Exchange Commission (SEC) regulations and US security laws. According to these laws, the sale and offer of tokens should be either registered or exempted from registration.

The Financial Conduct Authority (FCA) in the UK has issued several warnings related to ICOs. FCA has stated that whether or not an ICO falls within its boundaries will be evaluated on a case-to-case basis. FCA has also mentioned that ICOs are very risky and speculative investments.

Some of the benefits associated with ICO are:

Under an ICO, a startup tries to sell an idea or the concept of a project to enter the market. In an IPO, an already established private company dilutes its shareholdings to the public.

An ICO involves the sale of coins or tokens, tokenized securities (shares in a business) and utility tokens. On the other hand, an IPO dilutes the ownership of founders by issuing selling shares.

Tokenized securities (also known as security tokens and tokenized stocks) are digital cryptocurrencies or tokens representing equity shares in an organization. These tokens offer the same benefits as traditional securities and, in addition, the benefits related to digital currency like transparency, instant settlement, etc.

Security token offering (STO) is the offering of tokenized securities on the cryptocurrency exchange or security token exchange. STOs are issued in compliance with the legislation in the location where they are offered. They are of three kinds:

Praetorian Group was the first firm to register the platform with the SEC to offer an STO in March 2018.

What is Moonbeam (GLMR) crypto & its Polygon-based network?

Is Russia heading towards crypto ban?

Weekend wrap: How did top cryptos perform during the week?

What is Decentraland (MANA) crypto? All you need to know