Efficient Market Hypothesis (or EMH) is a theoretical concept according to which, the asset price reflects all the available information in the market and price changes only when the information pertaining to the same changes.

Moreover, as EMH believes that the price of an asset reflects all the available information in the public or private domain, it is impossible to buy an undervalued stock or sell an overvalued stock to generate alpha by super selection methods and timely trades.

Thus, EMH believes that the only way to generate alpha or outperform the market is to take higher risk.

While EMH has been the cornerstone of the modern financial theory, the theory is often disputed, and opinions regarding the same vary from person to person, and many believers argue that if the market cannot be outperformed, it does not make any sense to analyse a stock or create portfolio through fundamental and technical analysis. 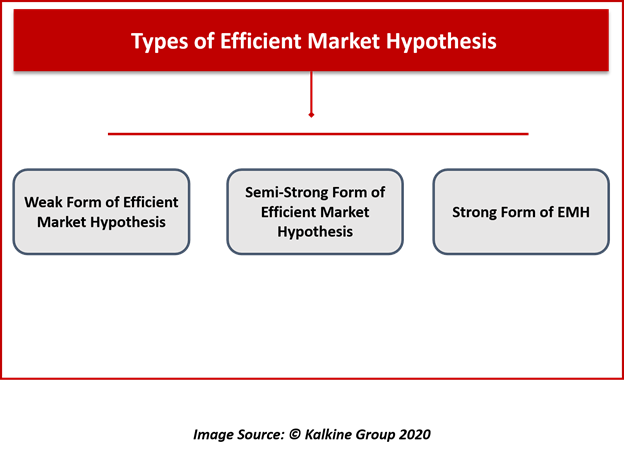 Though the EMH is a theory which summaries itself the whole, it is often offered in three different forms, which are as below:

The weak form of EMH argues that the present stock price reflects all the past information and directly condemns a part of the Wall Street research known as Technical Research. Under the field of technical analysis, analysts usually study past price behaviour to predict the future price.

As per the academics of technical analysis, certain price patterns implie certain future pricing paths; in other words, it’s a field which tries to outperform the market by studying historical price behaviour.

However, while the weak-form EMH strongly condemns technical analysis, it is the easiest form that could be empirically tested.

Additionally, while the weak form condemns technical analysis, it supports the fundamental analysis and suggests that undervalued and overvalued stocks could be identified using fundamental tools and investors can analyse fundamental tools such as the financial statement to increase the chances of outperforming the market.

The semi-strong form of EMH believes that the current price of an asset reflects all the information available in the public domain; thus, suggests that investors can neither use technical analysis nor fundamental analysis to outperform the market.

However, it also suggests that to generate alpha in the market, the techniques which one could act upon private information could be utilised.

At present, there are three criticisms surrounding the semi-strong form of EMH, i.e.,

The strong form of EMH firmly believes that all the information in public and private domain is reflected on the current market price, and neither technical nor fundamental analysis could be used to beat the market/ outperform the market.

EMH is yet not able to explain certain price anomalies seen in the market over the long-run.

For example, empirical evidence suggests that stocks trading at lower P/E multiples are often associated with generating higher returns against the market return.

Furthermore, if the available information about a stock is truly reflected in the price, then the neglected-firm effect could not be used to generate alpha, which is seldom the case in the real world, and empirical evidence suggests that firms often neglected my analysts and media are sometimes priced incorrectly against their intrinsic value. Value investing is predicated on the fact that people neglect stocks that are facing temporary headwinds and thus undervalued.

As per Random Walk Theory a change in a free tradable asset price does not depend upon its past behaviour, i.e., past movement in a stock price cannot be used to predict the future and any efforts in doing so is futile as price changes take a random walk and are unpredictable.

Furthermore, Random Walk argues that it is impossible to beat the market without taking on additional risk; thus, the theory suggests that any form of analysis, i.e., technical, or fundamental cannot be used to outperform the market.

Evidence in Favour of EMH

Some empirical evidence or various research available in the public domain shows that stock recommended by investment advisers, when compared with randomly chosen stocks, performs roughly equal over the long-go.