What is Data Mining?

Key Features of data mining include:

How does data mining work? 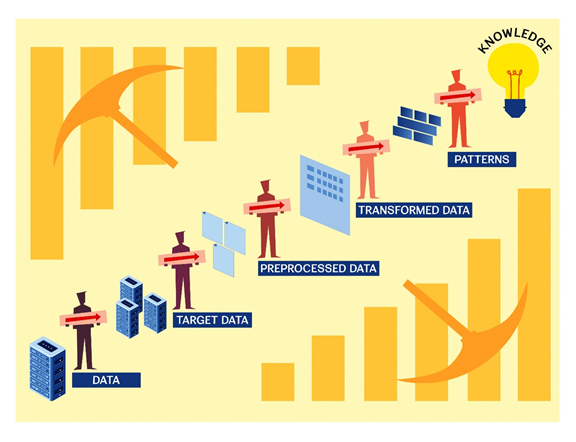 What is the process of data mining?

Multiple processes are involved in the implementation of data mining before mining happens. These processes include:

What are the techniques of data mining?

Data mining aims to find out the hidden, valid and all possible patterns in a large dataset. In this process, there are several tools available in the market that helps in data mining. Below is a list of ten of the most widely used data mining tools:

It is the average of the worst tolerable process that is considered acceptable. The quality level of a process is accepted if its data falls in between the range of the acceptable quality limits.

What is Data Analytics?  Data Analytics involves a set of quantitative and qualitative approaches and processes that can be used to determine useful information for business decision-making. The process involves various patterns and techniques, including: extracting a raw database, and categorising it to identify and analyse the behaviour, relation and connection of the results.  The ultimate goal is to acquire valuable information in order to make decisions for businesses’ benefit and productivity.  In today's competitive times, most companies chalk out their business plan with the help of data analytics. With organisations becoming customer-service oriented, data analytics has become a critical tool to reach the target audience in an effective manner while understanding their requirements. Once data is collected, it is analysed and stored according to organisations’ requirements.  The data analysis process has multiple layers involved, and its diverse modules are not just used in businesses but also in science and social science fields. Rather than making decisions based on just available information, one can utilise data analytics in examining the data in standard ways and churning out the results from it.  It has been observed that companies generally make decisions based on past references and future outcomes. Data analytics appears advantageous in providing useful information towards this end.  Why do Businesses Need to Use Data Analytics?  Many data analytics’ tools and softwares are readily available these days. These systems use resources, such as machine learning algorithms and automation.   Data scientists and analysts are counted amongst the leading career options as well. These professionals use data analytics techniques while researching and presenting useful information for businesses to increase productivity and gain. The process helps companies understand their target audience and determine effective ways to cater to their needs. Data analytics can further be used to design strategies in marketing campaigns and promotions and also evaluate its results.  Data analytics is primarily used in business-to-consumer (B2C) processes to boost business performance and improve the bottom line. There are data collection firms which gather consumer information and provide it to the businesses so that the companies can effectively influence the market. The collected data is not only used to understand and impact consumer behaviour but also determine market economics and its practical implementation.  The data used in the process can be either be data collected in the past or newly updated data. There are various methods to manage consumer and market information. It may come directly from the customers or potential customers or can be purchased from the data collection vendors. The data primarily includes audience demographics, behavioural patterns and expense threshold.  How Can Data Analytics be Effectively Used in Business Processes? Data analytics is an ever-evolving technique. Earlier, the data was collected manually, but with the rise of internet and technology, data is now collected online with the help of search engines and social media platforms. Subsequently, the information is analysed through available software.  Here is a list of some key steps businesses can follow to leverage the benefits of data analytics: Set up crucial metrics: This step reduces the guesswork and provide data-based insights to the businesses. Before embarking on the data analytics process, it is vital to determine the goal for your business. Analysing customer data helps in understanding conversion rate, consumer spending ability, demographics etc. The results of the analysis can support the businesses while making decisions in launching an advertising or marketing campaign. Similarly, the unwanted data can be erased from the database so that the brands can focus on their right target audience. The relevant metrics will change the course of the company and push it in the right direction. Moreover, once your key metrics are set, even when the market conditions change in the future, you can adjust the metrics according to the requirement and achieve the results. Set a clear module: It is important to examine the data correctly by avoiding common mistakes. An ambiguous path can produce confusing insights while wasting time and energy of businesses.  Therefore, it is recommended to draw a clear goal in order to achieve actionable insights. The data, when collected from different sources, need to be merged accurately in the analytics model. Businesses can modulate their data analytics systems either manually or through automation. There are various data modelling practices available in the market. The best use of these techniques can simplify the process of modelling complex data.  Data visualisation: Once the relevant data is collected, and the modules are set to analysis, visualisation of that data will assist in understanding the information correctly. When the businesses have an acute knowledge of what their target audience wants, they can then focus on strategising advertisement and content, which matches the consumers' interest.  It is the critical step in the data analytics process to distinguish insights from information.  Not everyone is comfortable dealing with numbers. Hence, ensuring that key stakeholders understand essential points and information can be displayed in a visually appealing format seem crucial to capitalise on data effectively. Right tools to implement insights:Having access to data and insights can get overwhelming. However, the information is worthless if the businesses are unable to implement it successfully. While it is important to collect the data and set critical metrics and modules to analyse it, it is also imperative to translate the data into practical actions. The eventual goal is to improve sales or grow profits. It is ultimately in the marketers' hands to transform the gained insights into a successful implementation. The consumers' insights should be incorporated while establishing a marketing plan and at all decision-making steps.