What is Consumer Price Index (CPI)?

Consumer Price Index or CPI is a measure of weighted-average of goods and services’ prices purchased largely by households. It is used to measure the percentage change of overall price level in the economy and consequently to calculate inflation.

CPI is an important tool used to judge the economic stability and financial steadiness of a country. Central banks introduce policies aimed at inflation control that use CPI as a measure of effectiveness. CPI is calculated for few essential goods which include food, housing, transportation, electronics, medical care, education, etc.

Why is CPI important?

CPI does not only compute the level of inflation in the economy but also gives a picture of the cost of living. Inflation can reduce the value of existing money in the consumer’s hand and can considerably lower the standard of living.

CPI is a timed measure of inflation rates which can shed light on the other macroeconomic indicators. For example, as inflation increases, the input costs for firms also increase. Thus, they are compelled to reduce their production and lay off workers. Therefore, high inflation can lead to unemployment in the economy.

Keeping a tab on inflation rates becomes necessary, especially for governing bodies like central banks. When prices are expected to increase, the central bank must control the supply of money in the economy by adopting contractionary monetary policies. This can only be done with prior knowledge about prices and inflation rates.

The current period CPI can also be used to determine future price stream. For instance, future property rents may be calculated by multiplying the current rent with the prevalent CPI. If CPI increases, so will the rent.

How is CPI calculated?

Various countries have different methods of calculating CPI based on the basket of goods they choose. In Australia, CPI is calculated by the Australian Bureau of Statistics and is published once every quarter. These items are then categorized into 87 categories (or expenditure classes) and 11 groups. Every quarter, price changes in these goods are calculated from the previous quarter, and then are aggregated to find out the inflation rate.

How are the goods and prices arrived at?

Prices are collected from various sources that sell household items like supermarkets, department stores and websites. Other sources include the prices of government provisions like electricity and fuel through government bodies designed to supply them.

For deciding the consumption basket, ABS focusses on the level of consumption of various goods and services in the economy. The item on which people are spending a larger part of their income, ends up gaining a higher weightage in the CPI calculation. Thus, it is important to note that higher weightage is given to those goods which take up a larger share in the expenditure of overall consumption. 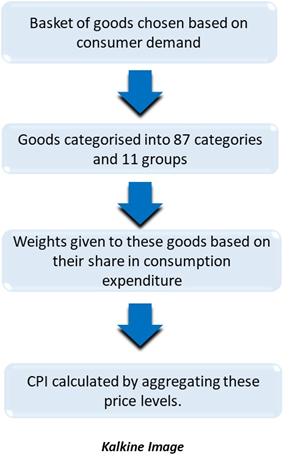 What are some of the problems with CPI?

Despite government authorities and international organisations relying heavily on CPI for information about various economic indicators, CPI has its own set of limitations which need to be considered. These include the following:

Despite all these limitations, CPI is a powerful tool used across the globe in analysing markets and economies. It can be used to compare how markets are progressing and which goods are more expensive in an economy. While using CPI, it is important to note that it is only a relative measure of price and it records price changes and not the absolute price levels.

Norton crypto mining services: All you need to know

Should you buy THG shares despite profit margins warning?

2 hydrogen energy AIM stocks you can buy in 2022