Tech company NVIDIA Corporation (NASDAQ: NVDA) has been in the spotlight in the wake of its latest quarter results, while CIIG Merger Corp (NASDAQ: CIIC) is the news for its upcoming merger with electric car startup Arrival Group. Stocks of chipmaker NVIDIA jumped about seven per cent in November ahead of its third quarter fiscal report. CIIG stocks, on the other hand, shot up by 69 per cent in value this month.

Let’s take a closer look at the latest performances of these two companies.

Stocks of artificial intelligence company NVIDIA Corporation began trending on Wednesday, November 18, after it posted its third quarter results of fiscal year 2021. They currently have a 10-day average share trading volume of 11.31 million, and that of 11.84 million in the last 50 days.

The scrips skyrocketed by 128 per cent this year as online gaming business boomed amid the coronavirus pandemic.

NVIDIA shares climbed about 53 per cent in the last six months. Over the past three months, the stocks gained nearly 11 per cent. 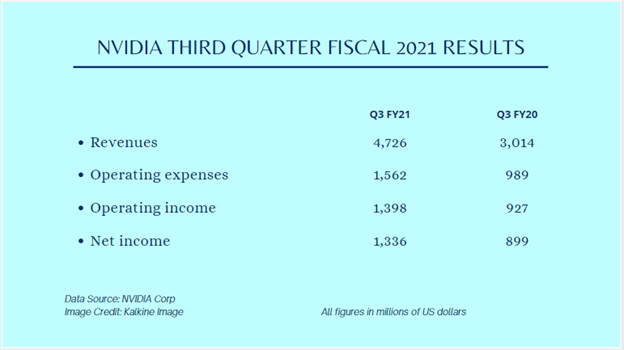 Its operating expenses in Q3 FY21 jumped 58 per cent YoY, amounting to US$ 1.5 billion. However, it was down four per cent quarter-over-quarter (QoQ).

The operating income stood at US$ 1.3 billion, posting a growth of 51 per cent YoY and of a whopping 115 per cent QoQ.

Its GAAP earnings per diluted share jumped 46 per cent year over year.

Stocks of blank check company CIIG Merger Corp have been rallying on the stock market since the news of its upcoming merger with Arrival Group was released.

The scrips shot up by 67 per cent in the third week of November. Since its debut on the stock exchange in February this year, CIIG shares climbed nearly 71 per cent.

CIIG is what one calls a special purpose acquisition company (SPACs), which has been formed solely for merger purpose and to raise capital for Arrival Group. The merger between the two companies will help Arrival Group get publicly listed as it absorbs CIIG in what is called a ‘reverse merger’, and rebrands CIIG shares as its own.

Arrival Group announced on Wednesday, November 18, that it has entered a definitive agreement with CIIG Merger Corp, and that the newly-merged company will be listed on the stock exchange of NASDAQ under the ticker of ARVL.

However, there have been some reports of CIIG Merger Corp being investigated for possible breaches of fiduciary duty and other violations regarding its merger with Arrival Group.

Its operating expenses for the latest quarter stood at a loss of US$ 0.18 million, while its net loss amounted to US$ 0.12 million.

The company had a total of US$ 1.01 million in cash and cash equivalents as of the end of September 2020.

The enterprise value of the combined company has been estimated to be US$ 5.4 billion, Arrival Group revealed in the recent report. It expects gross cash proceeds of approximately US$ 660 million.