Some TSX retail stocks like Alimentation Couche-Tard (TSX: ATD), Loblaw (TSX: L), Metro (TSX: MRU), etc traded in green on Thursday, May 26, as Statistics Canada released its retail trade data for March 2022. The agency reported that retail sales in March remained virtually the same as the month before.

The report noted that sales increased in 10 out of 11 subsectors in March. It added that gains led by increased sales at gasoline stations (up 7.4 per cent) and other nine subsectors were eroded by lower sales at motor vehicle and parts dealers (down by 6.4 per cent) during this period. Core retail sales zoomed by 1.5 per cent in March, excluding gasoline stations, motor vehicles, and part dealers, StatCan said.

The agency also provided an advance estimate that retail sales are likely to be up by 0.8 per cent in April this year. With this development, let us discuss five TSX retail stocks that rose after the release of the latest retail sales figures.

Alimentation Couche-Tard is the owner and operator of convenience stores and provides several items, ranging from groceries to car wash services to transportation fuels. Recently, the company deployed its first electric vehicle (EV) charging station in South California on May 20.

ATD stock rose by over 26 per cent in 52 weeks. Refinitiv data says that ATD’s Relative Strength Index (RSI), which depicts bullish or bearish price momentum, was 50.42.

Loblaw stock returned approximately 52 per cent in 12 months. Loblaw’s RSI value was 53.18 as per Refinitiv findings.

Metro Inc’s sales grew 1.9 per cent year-over-year (YoY) to C$ 4.27 billion in Q2 FY2022. The C$ 16-billion market cap grocery company recorded an increase in its food and pharmacy same-store sales (up 0.8 per cent and 9.4 per cent, respectively) in the latest quarter.

Also read: VMware & Broadcom stocks soar on acquisition plans: What you must know

North West Company posted a net profit of C$ 35.6 million in Q4 FY2022 compared to C$ 32.83 million in the same period a year ago. North West’s dividend yield was over four per cent. Dividend yield denotes how much the company is paying its shareholders annually (in the form of dividends) compared to its stock price.

NWC stock spiked by roughly four per cent in 2022. Its RSI value stood at 49 as of May 26, according to Refinitiv.

Empire Company has a market capitalization of over C$ 10 billion and operates foot retail, investment and other businesses.

According to Refinitiv data, NWC’s Moving Average Convergence/ Divergence (MACD) indicator fell below base line in May. However, its RSI value was 41.04, above the oversold mark of 30 on May 26. EMP stock swelled by nearly one per cent to close at C$ 40.77 apiece on May 26. 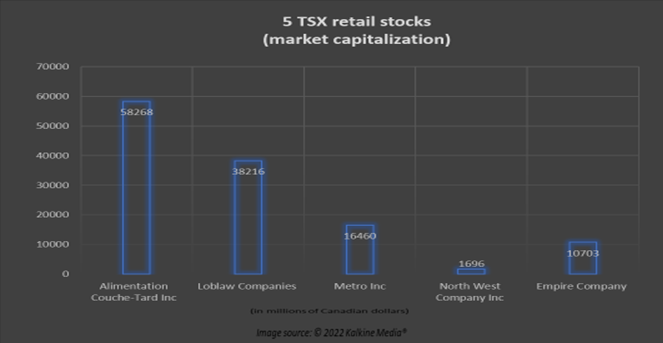 Investors looking to invest in the retail sector can consider these TSX stocks. However, one should note that rising inflation and increased rates could impact consumers’ buying behaviour, which can affect these retail stocks.