5 Canadian penny stocks to buy under 50 cents before 2022

Investors often look for pocket-friendly stocks that can fetch healthy returns in a short span of time. As penny stocks are usually low priced, they can draw investors’ attention for quick gains depending on the prevailing market conditions.

On that note, let us look at some Canadian penny stocks under the value of 50 cents. 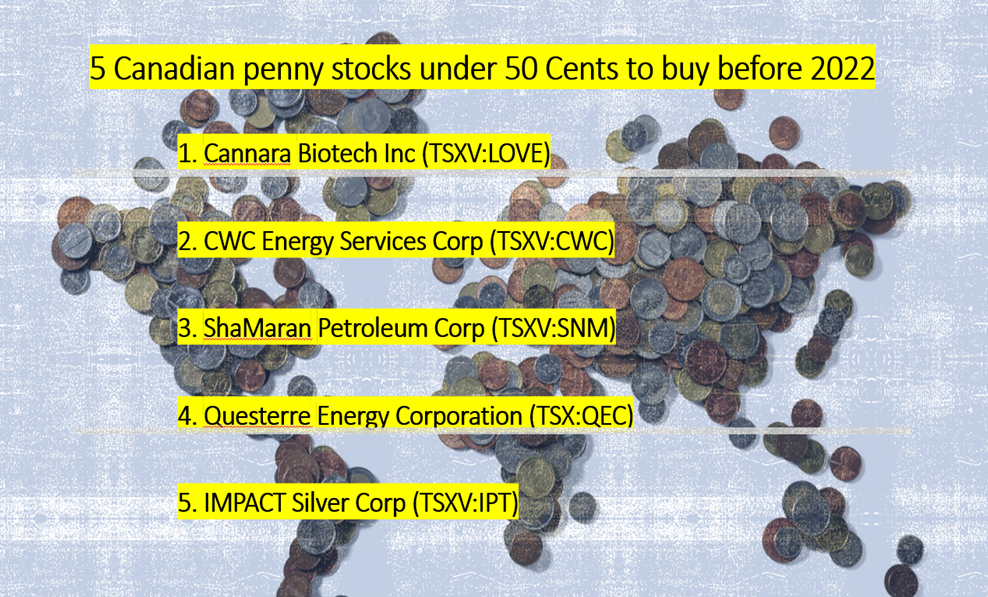 The cannabis producer reported a total revenue of C$ 6.5 million in the fourth quarter of fiscal 2021, which was a year-over-year (YoY) rise of C$ 5.9 million. Its gross profit surged by 70 per cent YoY to C$ 4.5 million in the latest quarter.

The cannabis stock swelled by nearly 81 per cent this year. It also rocketed by roughly 131 per cent in the past year.

Cannara’s stock closed at C$ 0.14 apiece on Wednesday, December 8, up by almost eight per cent.

Also read: Which Canadian penny stocks would be a smart buy?

The oil and gas service firm produced a net income of C$ 2 million in its latest quarter, a YoY rise of C$ 2.8 million.

CWC stock grew by almost seven per cent in the last six months. On a YTD basis, the energy stock zoomed by over 29 per cent. It closed at C$ 0.155 apiece on December 8, marking a decline of three per cent.

ShaMaran Petroleum Corp posted a revenue of US$ 29.07 million in the third quarter of fiscal 2021, up from US$ 15.35 million in prior year quarter.

Its cash flow from operations amounted to US$ 12.54 million in the latest quarter compared to US$ 4.48 million a year ago.

The oil producer saw its stock close at C$ 0.06 apiece on December 8.

In the last six months, SNM stock soared by about 20 per cent. It delivered a year-to-date (YTD) return of over 71 per cent.

Questerre Energy Corporation recorded an average production of 1,363 barrels of oil equivalent per day in the third quarter of fiscal 2021. Its total revenue was C$ 7.38 million, and adjusted funds flow from operations was C$ 3.6 million in Q3 FY2021.

QEC stock increased by almost seven per cent on a week-to-date (WTD) basis. It also delivered a month-to-date return of over 10 per cent.

On December 8, the energy stock rose by over three per cent at market close and closed at C$ 0.16 apiece.

Its YTD cash flow from operations also improved to C$ 2.8 million in the latest quarter.

The Vancouver, British Columbia-based miner, saw its stock close at C$ 0.495 apiece on December 8, down by approximately one per cent. Its stock rose by about four per cent in the past three months.

Penny stocks may be low priced, but they are also highly volatile to market dynamics. Thus, investors should be cautious while investing in penny stocks depending upon their risk-return profile.