Within the chemical industry, the petrochemical segments include hydrocarbons like benzene and ethylene, whereas the organic chemical segment includes components like methanol and isopropyl.

Methanol production relies heavily on transportation to move methanol from the plant to its customers or the methanol users for producing other products. The entire process requires safe and reliable ocean shipping and transporting. It also requires marine storage, and the methanol industry is prone to accidents which is a worrisome factor.

As per the latest report published by Statistica on July 6, the total value of petrochemical shipments was C$ 6.6 billion in 2019.

Now, let us turn our attention to a dividend-paying Canadian chemical stock that posted a one-year stock return of 65 per cent.

Methanex Corp (TSX: MX) and the revamp of its Geismar 3 project

Headquartered in Vancouver, Canada, Methanex Corp. is a company engaged in manufacturing and selling methanol. With an extensive supply chain network and the largest fleet of methanol ocean tankers, the company runs its operations and production sites in New Zealand, Egypt, Canada, Chile, and the US.

The company is the largest producer and supplier of methanol to international markets like Asia, North America, South America, and Europe.

The methanol produced and sold by this chemical company is used to produce foams, adhesives, and other products like windshield washer fluids and solvents. Methanex also intends to sell methanol to the oil and gas industry.

In a recent report, John Floren, president and CEO of Methanex Corporation announced the restart and revamp of the construction of the Geismar 3 project that is believed to strengthen the company's asset base.

The chemical company intends to roll out a quarterly dividend of US$ 0.125 per share on September 30, to its shareholders. The dividend yield was 1.15 per cent on September 20. 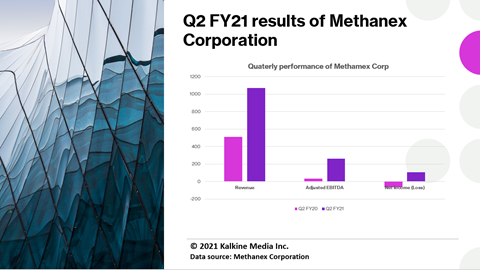 The stock on a quarter-to-date (QTD) basis expanded by 33 per cent, and over the past year, it climbed by close to 65 per cent.

The management of Methanex believes that the strong demand for methanol and industry-wide challenges on supply are likely to continue in Q3 FY21. This shall also be supported by the increase in methanol prices.

During Q2 FY21, a strategic agreement was signed between Waterfront Shipping, a subsidiary of Methanex, and Mitsui O.S.K Lines Ltd (MOL). This partnership is believed to improve the global supply chain by the management of the company. The quarter ended with a cash balance of US$ 750 million and an undrawn credit facility of US$ 300 million.

The strategic tie-up on the shipping agreement with Waterfront Shipping, Methanex, and Mitsui O.S.K.Lines Ltd. will serve as a critical element of the supply chain network of Methanex. Subjected to regulatory approval, the agreement is expected to commercialize by the end of 2021.

The company stands with undrawn backup liquidity of US$ 900 million at the end of Q2 FY21.