Is Pembina (TSX: PPL) stock a buy as it merges business with KKR?

Pembina Pipeline Corporation (TSX: PPL) made headlines on Tuesday, March 1, after it announced its plans to merge some of its assets with KKR & Co, a global investment firm, in Canada.

Following this development, the midstream energy company saw its stock clock a new 52-week high of C$ 44.77 during the session.

Let us have a close look at this merger deal.

Pembina and KKR said that they have agreed to merge their natural gas processing assets into one entity, Newco, in a C$ 11.4 billion deal (assets under constructions excluded).

Pembina said that it will own 60 per cent of this joint venture (JV) entity, while KKR’s global infrastructure funds will own the remaining 40 per cent.

The Calgary-based energy pipeline company will operate and manage Newco, as per the release. This deal also includes the Veresen Midstream and Energy Transfer Canada (ETC) businesses.

Also read: Is BMO stock a buy as Bank of Montreal’s profit swells 45% YoY in Q1?

Pembina presently has a 45 per cent ownership stake in Veresen, while KKR, through funds, holds a 55 per cent stake. KKR also owns 49 per cent interest in ETC business via its funds.

The Canadian hydrocarbon transporter added that the resultant new firm will buy the remaining 51 per cent stake in ETC from Energy Transfer LP. 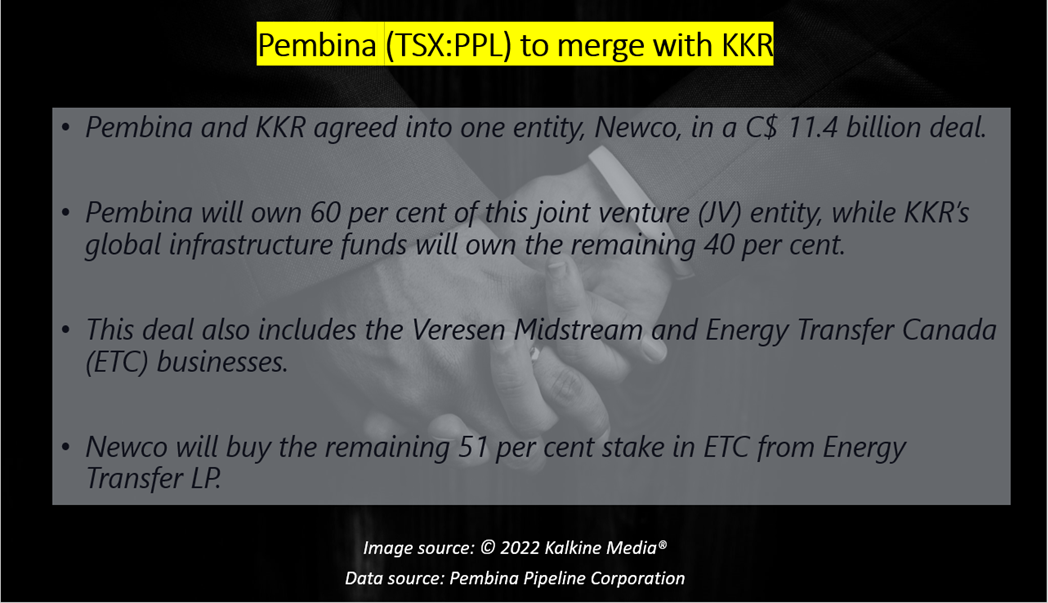 Pembina stock closed at C$ 44.08 apiece on Tuesday, up by over two per cent, with 3.3 million shares switching hands this day.

The midstream energy stock also shot up by nearly 34 per cent year-over-year (YoY).

Upon completing this JV deal, Pembina said that it is planning to hike its monthly dividend by 3.6 per cent, i.e., 0.0075 apiece. The energy infrastructure company also stated that this merger is expected to provide “greater exposure” to northeast British Columbia (NEBC).