Canada is one of the leading global producers of minerals like cobalt, graphite, and nickel. The metals and mining industry is also producing commodities such as natural gas and oil. Historically, the country has profited from low-cost mineral and metal products, whose mining created employment opportunities and substantial capital development. However, this industry was not spared by the pandemic-led recession. Mining operations were impacted by government-directed lockdowns, social distancing, and the reduced demand for various commodities. Stocks of companies such as First Quantum Minerals Ltd. (TSX: FM) and New Gold Inc (TSX: NGD) were also impacted by the pandemic.

The mining industry has made significant contributions to Canadian economy. The industry directly employs 409,000 people across mineral extraction, smelting, production, and manufacturing divisions, and indirectly employs an additional 217,000 people. It is also the largest private-sector employer of indigenous people, employing 16,500 natives. In 2018, the metals sector contributed C$ 97 billion or 5 per cent to Canada’s total nominal GDP, shows federal data.

The company’s 10-day average trading volume is 2.1 million. The stock is among the most actively traded stocks across the TSX and TSXV in the last 10 days, as per data on TMX Money.

First Quantum stock has rebounded almost 161 per cent since the pandemic-led crash on March 24 and is up 7.34 per cent in the last three months. 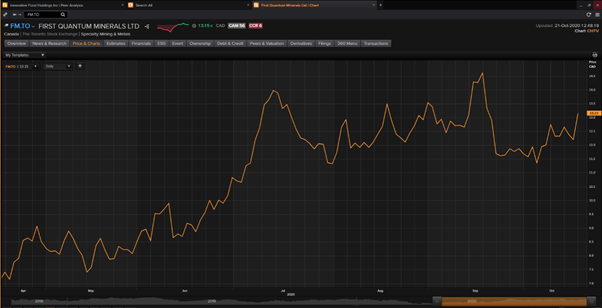 The company has a dividend yield of 0.076 per cent. First Quantum pays the semi-annual dividend of C$ 0.005 per share.

The company posted gross profit of US$ 141 million in the latest quarter, a 28 per cent decline compared to US$ 196 million in Q2, 2019. The operating cash flow decreased by nearly 12 per cent to US$ 155 million in the second quarter.

The First Quantum Minerals Ltd. will release its third-quarter earnings on October 29, 2020.

Toronto-based New Gold Inc is a gold mining company with operations spread across the globe. The company has invested in New Afton Mine in Canada, Mesquite Mine in North America, and Cerro San Pedro Mine in Mexico. It also has a 100 per cent ownership of the Rainy River and Blackwater ventures in Canada, along with a minority stake in  El Morro gold stream project in Chile. The New Afton Mine in British Columbia is the main section, generating almost 50 per cent of group revenue.

The gold mining company’s 10-day average share trade volume is 3.1 million. The stock is among the most actively traded stocks across the TSX and TSXV in the last 10 days, as per TMX data.

The company stock is up 32.5 per cent in the last three months. It has surged almost 290.4 per cent since the pandemic-led crash on March 24. The year-to-date growth stands at 147.8 per cent.

The company price-to-book ratio is 1.748 and the price-to-cashflow ratio is 5.60. Its current debt-to-earnings ratio is 1.32 as per TMX data.