The Mining Association of Canada congratulated Mr. Justin Trudeau on getting elected for a third consecutive term as prime minister.

Before the election results, uncertainty sprouted among the investors and mining companies giving way to sentiment swings of the prices of iron stocks. The liberals had an election manifesto that promoted low carbon-intensive mines, low emission technologies, and a clean and green ecosystem.

Some analysts believe that strong macroeconomic policies formulated by the new government can write a growth story for the future.

On that note, let us explore some Canadian iron stocks.

The shareholders of Labrador Iron Ore are expecting a quarterly dividend of C$ 2.1 per share to be paid on October 26. The average three-year dividend growth rate was 39.51 per cent, and the dividend yield was 22.02 per cent on September 22.

The stocks of Labrador Iron Ore closed at C$ 38.14 on September 22 and posted a one-year return of 44 per cent. 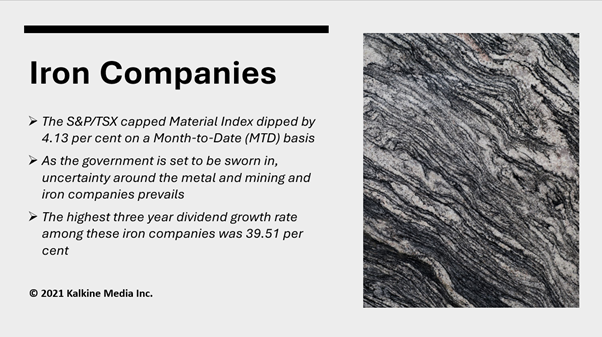 The iron ore properties of the exploration company are based in Quebec, Canada. The company explores and develops iron ore. Champion Iron held a market cap of C$ 2.24 billion and outstanding shares were 506.42 million on September 22.

Champion Iron posted revenue of C$ 545.4 million and a record EBITDA of C$ 405.7 million in Q1 FY22. During the quarter, the company acquired the Kamistiatusset iron project and commenced the project's feasibility study.

As per the latest report, the management of Black Iron stated that the Ukraine government had reached a memorandum of understanding on the investment support on its Shymanivske Iron Ore Project.

The dividend-paying mining company produces metals like iron, zinc, copper, silver, etc. On September 15, Altius Minerals issued a quarterly dividend of C$ 0.07 per share to its shareholders. The dividends grew at a five-year average of 12.56 per cent, and the dividend yield was 1.81 per cent on September 22.

Altius Minerals in Q2 FY2021 posted royalty revenue of C$ 21.9 million, an increase of 68 per cent Year-over-Year (YoY). Its net operating cash flow was C$ 5.8 million in Q2 FY21. The iron ore revenue was C$ 5 million, accounting for 23 percent of the total royalty revenue in the same quarter.

At the market close on September 21, the stock price of Altius Minerals was C$ 15.43, and the one-year stock return was 49 per cent.

Oceanic Iron is a Canadian iron exploration company that acquires iron ore properties located in Quebec. The company launched its initial public offering (IPO) on June 13, 1988, and got listed on the Toronto Stock Exchange Venture.

On a quarter-to-date (QTD) basis, the stock price of Oceanic Iron Ore dipped by close to 32 per cent and was down by nearly 46 per cent over the past year. The stock price closed at C$ 0.13 on September 21.

The uncertainty around the Canadian election led to some price volatility but the incumbent government may give a ray of hope to investors and mining companies, however, that remains to be seen.