In a fresh jolt to the cryptocurrency market, China's central bank said on Friday, September 24, that all cryptocurrency transactions are illegal in the country. The central bank wants to crack down on the market, and this is not the first time China has taken strict measures against virtual currencies.

The People's Bank of China (PBOC) said in a question and answer (Q&A) segment on its website, that token issuance, crypto trading, order matching, and derivatives for cryptocurrencies are prohibited in China now.

The PBOC has also banned overseas cryptocurrency exchanges from providing services in mainland China and has termed them as illegal. The central bank said that overseas crypto exchanges using internet services to offer services to Chinese nationals will fall under the category of illegal financial activities.

Apart from these exchanges, financial institutions and non-bank payment services companies are not allowed to facilitate transactions related to cryptocurrencies.

This is not the first time China has taken a tough stance on cryptocurrencies, earlier this year, it had launched a crackdown on crypto mining and that had led to a sharp decline in cryptocurrency prices.

This move is expected to change the face of the cryptocurrency industry and on that note, let's look at the possible impacts of PBOC's ban:

Ever since reports surfaced about the central bank’s decision, the cryptocurrency market is trading in the red, and it is expected that the prices of cryptocurrencies will decline sharply.

According to CoinMarketCap, the total market cap was below the US$ 2 trillion mark at 6:30 AM EST. The world’s oldest cryptocurrency Bitcoin has declined by five per cent and Ether fell by nine per cent.

As altcoins were rising and seemed to have entered a bullish zone, China’s move impacted them more than the traditional virtual currencies. Top altcoins like XRP, Solana and Binance coin declined by more than seven per cent.

·       Crypto-related stocks could come under pressure

At the time of writing, crypto-related stocks had come under pressure due to this move. Coinbase Global Inc (NASDAQ:COIN), one of the biggest cryptocurrency companies in the world, recorded a decline of 3.4 per cent in its share prices during pre-market trading.

Meanwhile, MicroStrategy (NASDAQ:MSTR), the first company to invest treasury assets in Bitcoin, recorded a decline of five per cent during pre-market hours.

The move of making cryptocurrency transactions illegal will likely trigger a massive sell-off. Such decisions invite bearish sentiments, and this means that people would be scared to invest in crypto-assets and that will decrease the number of buyers in the market.

During a sell-off, a large volume of cryptocurrencies may be sold within a short span and that can cause the price of the virtual currencies to decline rapidly. 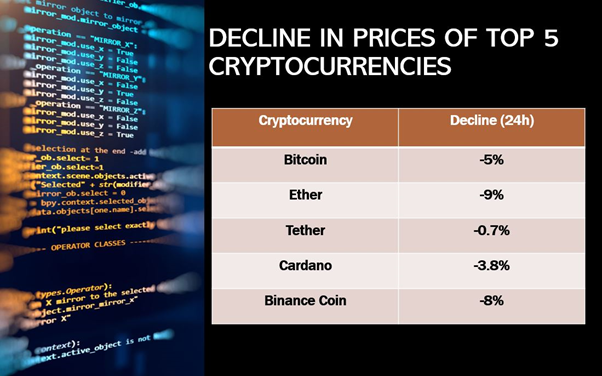 So far, countries with poor economies have shown interest in adopting cryptocurrencies as legal tender. El Salvador, whose economy is in crisis, became the first country to adopt Bitcoin as legal tender and other nations like Panama and Argentina could follow suit. However, even they are economically weaker countries.

The adoption of Bitcoin as legal tender may appear as if the acceptance of cryptocurrencies is increasing globally but that is not the full picture.

Everybody may not want decentralization and countries in favor of centralization could support China's move and start rolling out central bank digital currencies (CBDCs). China already has its own CBDC, and it is called the electronic Chinese Yuan (e-CNY).

A CBDC is a virtual form of a fiat currency and is regulated by a monetary authority such as a central bank. The electronic currency acts as a digital token of the official currency and remains centralized.

The cryptocurrency market is highly volatile, and China’s intensified crackdown is expected to increase the volatility and invite a bearish sentiment in the market.