Has HEX really dethroned Cardano as 3rd largest crypto & is it legit?

According to reports, HEX featured as the fourth-largest cryptocurrency on CoinMarketCap on Wednesday, September 8, but it disappeared from the list. Although the name doesn't appear in the top 100 cryptocurrencies, HEX's market cap continues to be reflected with an amount higher than Cardano.

Launched in 2019, HEX was created as a new financial tool on the Ethereum Network and the native token HEX was designed to become a store of value by replacing the certificate of deposit. The cryptocurrency gained momentum and still catches investors' attention; however, it has often been called a part of a Ponzi scheme. 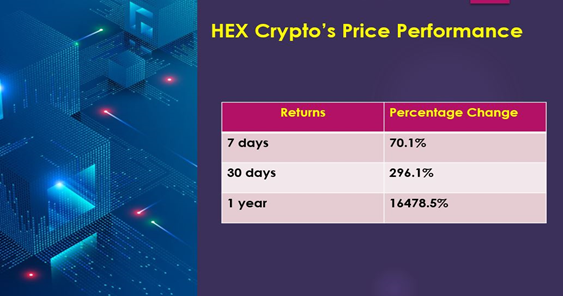 A former HEX employee had reportedly called out the cryptocurrency for its dubious nature and named the project's founder, Richard Heart, as the perpetrator of the scam. The HEX project was dubbed a scam as it reportedly promised “10,000x returns,” which sounds too good to be true.

According to crypto analysts, promises of returns are a red flag as the cryptocurrency market is highly volatile and it is difficult to make commitments of assured returns in such a scenario.

According to the project's website, HEX is not a Ponzi scheme as the interest comes from inflation and it is then paid to stakes. Based on the data from CoinGecko, the HEX token has returned 16,478.5 per cent in the last twelve months and 70 per cent since the past week.

On Friday, September 10, the HEX token clocked an all-time high of US$ 0.48 per token and its one-day volume surged by three per cent.

Before making any investments, it is important to study the scam claims of crypto analysts and counterarguments by HEX developers.

Also Read: Which crypto to buy now in Canada?

If you find the HEX crypto suitable for your portfolio investment, you could buy the HEX token through decentralized exchanges like Uniswap.