Every year, people worldwide celebrate International Women’s Day on March 8 to honour the contribution made by women and girls in bettering their lives and those around them.

This year, the theme for International Women’s Day is #BreaktheBias, which is aimed at calling out gender inequality and stereotypes to help women have unbiased experiences.

So, let us celebrate Women’s Day this year by looking at the following TSX companies that are working on building a better workplace for women in Canada.

The Scotiabank Women Initiative ® launched an accelerator program on Monday, March 7, to empower women in the Quebec automotive industry.

The Scotiabank-led Women in Auto Accelerator program offers free participation, linking young professionals with industry leaders and peers to seek mentorship and guidance throughout the province.

Research firm Equileap, this Monday, recognized the Canadian Imperial Bank of Commerce as the top company (#1) for gender equality in the country for the second year in a row. In addition, the bank achieved the 40th position for gender equality across the world. 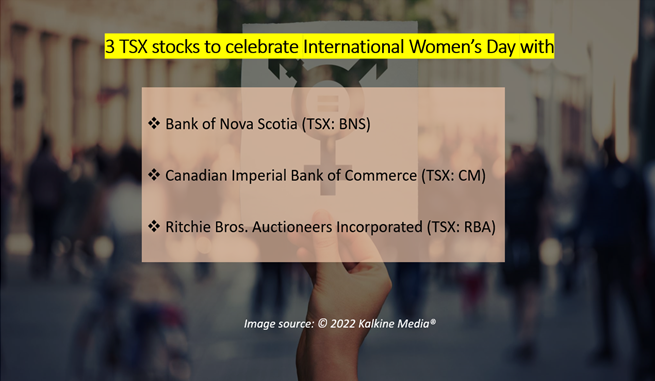 Ritchie Bros Auctioneers is a Canadian asset management and disposition firm led by two women in the topmost position in the management, with Ann Fandozzi as CEO and Sharon Driscoll as CFO.

On Monday, the heavy equipment marketplace company commenced two big auctions in Edmonton, Canada and in the Rocky Mountain region, the United States, which attracted more than 26,250 bidder registrations in total and concluded a gross transaction value of over US$95.

Stocks of Ritchie Bros closed at US$ 72.76 apiece on Monday with a month-to-date gain of roughly 10 per cent.

Women around the world are working on breaking platitudes, gender stereotypes and closing the power gap present even in today’s world.

Some Canadian companies put significant pressure on supporting gender equality and strengthening the role of women in the corporate world. A day like International Women’s Day may be one to look into such companies.