Before exploring Pembina Pipeline Corporation (TSX: PPL) and Bank of Nova Scotia (TSX: BNS), we would like to simplify the term ‘Dividend’ for new investors. The part of the company’s profit, which is paid to its stockholders, is referred as dividend. Companies give dividends in several forms such as stocks, cash payments, etc. The company’s Board of Directors decides on dividend payment followed by the shareholders’ approval.

Let us now look at two largecap stocks with dividend yields over six per cent:

Pembina Pipeline Corp holds a dividend yield of 8.9 per cent. The energy stock announced cash dividend of US$0.1584 per share for October, which is payable on November 13, 2020.

As per details on the TMX Group, Pembina’s three-year dividend growth is 6.50 per cent. In September, it paid shareholders a cash dividend of US$0.1607 per share for the month of September.

Pembina Pipeline operates is a regional pipeline network which is expanded over 9000 kilometers. Its network includes heavy oil, hydrocarbon, and oil sands pipelines.

Let us look at the stock performance and the financial health of the company.

Pembina Pipeline’s stock has rebounded over 70 per cent since the pandemic-led crash on March 19. However, the year-to-date (YTD) stock performance is down by 41.5 per cent. This energy stock is almost 15 per cent down in the last six months.

The energy pipeline stock ranks among TMX Money’s top energy companies with the largest price gains in the last 30 days on the Toronto Stock Exchange (TSX) and TSX Venture (TSXV). The dividend stock’s 10-day average trading volume is 2 million and is among the most active stocks trending across the TSX and TSXV in the last 10 days.

Top Canadian lender Bank of Nova Scotia holds 6.354 per cent dividend yield currently. It recently declared that its shareholders will get a cash dividend of nearly C$ 0.9 per share on October 28, 2020. 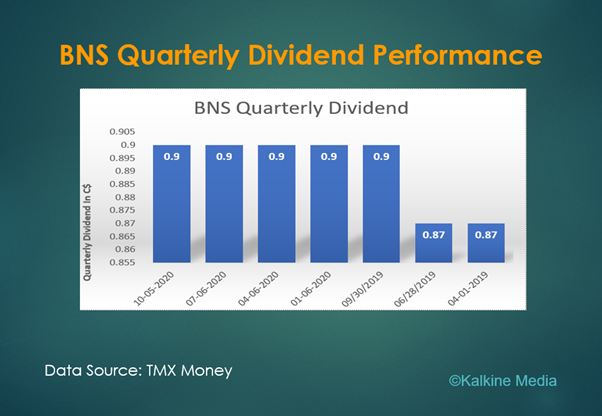 To delve into this top dividend paying bluechip stock, we will look at its stock performance and the financial health of the lender.

BNS’ stock has rebounded over 21 per cent since the pandemic-led low on March 24. However, the stock is down by 22.75 per cent year-to-date.

This largecap stock has plunged 15 per cent in the last six months. However, in the last three months, the stock has marginally recovered by almost 3 per cent.

The lender has been placed among TMX Money’s top financial services stocks with the largest price gains in the last 30 days across the TSX and the TSXV. This banking stock has a 10-day average share trading volume of 4.8 million and is highly ranked among the TSX and TSXV companies with the high trade volumes in the last 10 days.