Oil prices have been rocketing again, with investors worldwide closely monitoring oil demand and supply. It is believed that tightened oil supply stemming from the Russia-Ukraine crisis and China's comeback from COVID curbs is resulting in excess oil demand, which can continue to drive up oil prices.

Following are five TSX oil and gas stocks that investors can look into.

Imperial Oil is a fully integrated oil company with upstream, refining and marketing operations. Imperial Oil said ‘strong’ market conditions drove its quarterly net profit to C$ 1.17 billion in Q3 FY2022, which it noted was its highest Q1 net profit in over 30 years.

As for its stock performance, IMO climbed over 95 per cent in nine months. Refinitiv findings suggest that IMO stock had a Relative Strength Index (RSI) value of 55.79 on Monday, June 13, depicting a moderate trend in the market.

The energy infrastructure firm significantly increased its profitability by reporting a net income of C$ 358 million in Q1 FY2022 compared to a loss of C$ 1.05 billion in Q1 2021.

TRP scrip grew by almost 21 per cent in six months. TRP's RSI value sharply dropped this month to 39.33 on June 13, as per data taken from Refinitiv. However, its RSI was above the oversold mark of 30.

On the financial front, Canadian Natural paid approximately C$ 0.7 billion as dividends, incurred about C$ 0.8 billion in net capital expenditures, and recorded around C$ 3.4 billion in free cash flow in the first three months of 2022.

CNQ stock galloped by nearly 81 per cent in nine months. CNQ's RSI value was 42.03 on June 13, according to Refinitiv. 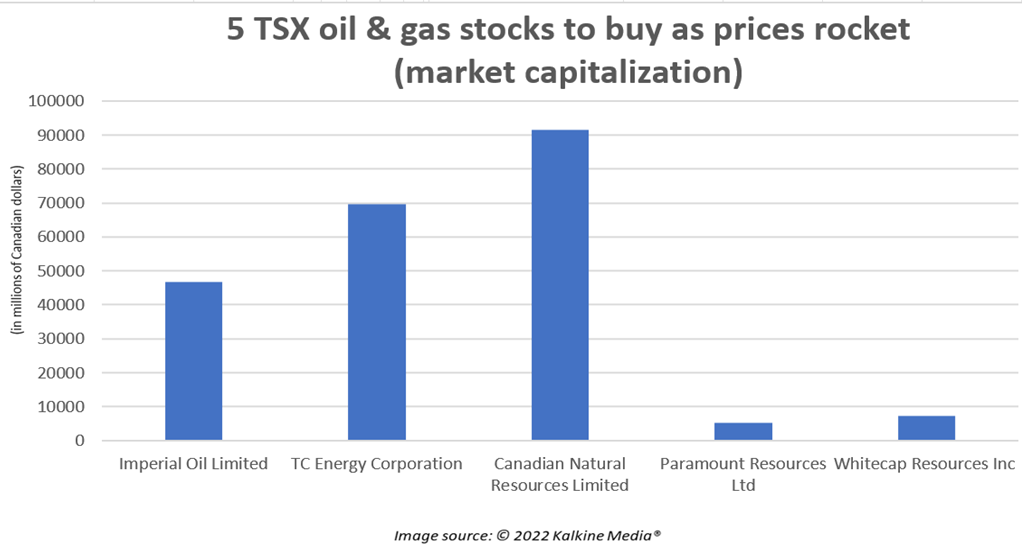 Paramount Resources is a mid-cap oil and gas company with upstream and downstream operations in Canada and the United States. Apart from potential returns, Paramount also delivers dividends every month, making it a suitable investment option for investors seeking short-term gains.

Whitecap Resources is another mid-cap company in the oil and gas properties. The C$ 7 billion market cap company also doles out monthly dividends to its shareholders. This oil company also has a return on equity (ROE) of 74.61 per cent, which is higher than the above four companies, indicating profitability.

WCP stock shot up by over 102 per cent in nine months and recorded an RSI value of 58.03 on June 13, according to Refinitiv data.