After the US, Canada too seems to be face-to-face with a worrisome baby formula shortage. Health Canada said on Thursday, May 19, that the nation is seeing formula scarcity for infants with allergies and medical conditions.

The health body said that some provinces have reported low supplies for extensively hydrolyzed and amino acid-based formulas.

The formula shortage, which began amid the pandemic, seems to have been exacerbated after Abbott Laboratories’ manufacturing facility in Sturgis, Michigan, shut down in February due to bacterial infection cases.

US President Joe Biden invoked emergency powers on Wednesday, May 18 to ease the infant formula crunch there. Health Canada, on the other hand, has said that officials are closely watching the situation and working with formula makers to import the product.

This baby formula crisis shines a light on high concentration of the formula industry. However, amid all the rising concerns, a Canadian has increased its Q2 2022 guidance to aid the situation.

Let us talk about this Canadian formula maker in detail.

Else Nutrition Holdings develops plant-based food and nutrition products for all ages, from infants to adults. This TSX company is headquartered in Israel and holds a market capitalization of over C$ 139 million.

On May 18, Else Nutrition adjusted its growth projection for the second quarter of fiscal 2022. The company said that it is experiencing a wave of growth stemming from the baby formula shortage in the market.

Else Nutrition now anticipates its revenue to reach somewhere between C$ 2 million to C$ 2.2 million in Q2 FY2022. This increased guidance indicates a 25 per cent to 38 per cent surge over the first three months of 2022. The company said it is witnessing ‘robust’ preliminary results via its online and retail channels primarily due to the formula crisis.

Else Nutrition reported a quarter-over-quarter (QoQ) surge of 26 per cent in its revenue to C$ 1.6 million in Q1 2022. The nutrition manufacturer said that this revenue growth was led by the expansion of its toddler products and the launch of a new product line, Kids Complete Nutritional Shake. The company had a cash balance of C$ 19.8 million at the end of Q1 2022.

The penny cap company stated that its sales on Amazon.com jumped by 40 per cent QoQ in the latest quarter. The baby formula company also revealed that its products are now available in more than 1,300 stores in the U.S. 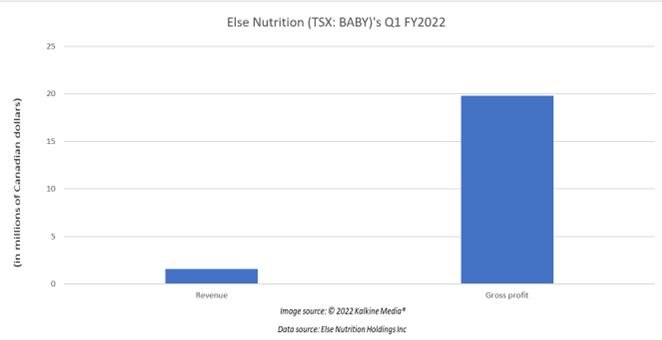 The Relative Strength Index (RSI) value signifies a bullish or bearish trend for the stock. According to data from Refinitiv, Else Nutrition’s RSI was moving upwards and was 58.23 on May 18. Moving Average Convergence/Divergence (MACD) suggests that the stock has been moving around its base line or zero line since February.

Else Nutrition recently launched two fresh products, Toddler Omega and Cereal line, which the company believes will support its improved guidance. The company also noted that its subscribers on Amazon.com increased by 20 per cent over the last four weeks and its daily sales doubled in the past few days.