After some cities in China had Covid-19 lockdowns, it was reported May 16 that in April, retail sales in the world’s most populated country fell by 11.1 per cent year-over-year, significantly more than what was expected.

What’s more is that industrial production in April fell nearly three per cent compared to one year earlier when a 0.4 per cent increase was expected. Considering that the second-biggest economy in the world has pretty much been its factory in recent decades, this seems concerning.

This would likely have ripple effects for the rest of the world including exasperating the global supply chain crisis and experts say fear of this may be pushing market sentiment to be more bearish than it already was so far.

The TSX Composite Index seems more insulated from the events this year, be it the Russia-Ukraine war or China’s lockdown, because it is a commodity heavy index. While Nasdaq’s benchmark and the S&P 500 ended in the red, Canada’s benchmark index gained 0.53 per cent, largely driven by commodity stocks.

So, let’s look at some TSX commodity stocks.

Its trajectory over the past year has generally been upward. Topaz has a price-to-earnings (P/E) ratio of 86.7 and its dividend yield is 4.4 per cent.

Dividend yield is the dividends paid out by a given stock relative to its cost price.

TVE grew by over five per cent Monday to close at C$4.79. The oil and gas stock has soared 106 per cent in nine months.

TVE has the lowest P/E ratio on this list, that of 3.9, which means it is most desirable in this regard. The P/E ratio represents the amount of dollars needed to be invested to bag one dollar of profit, so the lower, the better.

FM spiked over five per cent Monday and stood at C$34.12 at market close. Over the last six months, it has gained 23 per cent and year-to-date growth sits at 13 per cent.

Before its gain seen on Monday, it was likely in undervalued territory. The stock’s P/E ratio is 5.8 and its dividend yield is 3.5 per cent. 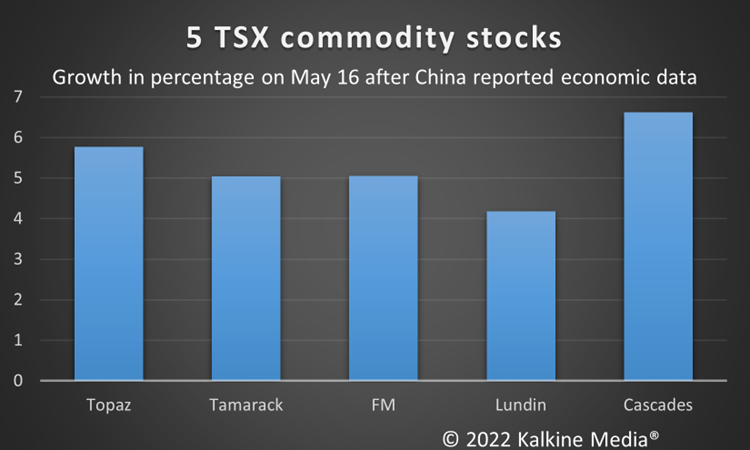 The TSX Composite Index is down 4.8 per cent YTD. By contrast, the S&P 500 is down about 16 per cent in that period and the Nasdaq Composite is in the red by 25.5 per cent.

This difference may be attributed to the fact that Canada’s benchmark index is a commodity heavy index with energy and materials being 31.4 per cent of it.

The S&P/TSX Capped Energy Index has rocketed 53.4 per cent this year. The S&P/TSX Composite Index Metals and Mining (Industry) is also in the green for the year.

Also read: TSX in green with energy & base metals up, commodities & loonie gain