Investing in well-researched dividend stocks is often considered to be a tried-and-tested method of building wealth over time. Dividend-paying companies, commonly if not always, have a history of holding a sturdy financial position and an established business model, which could make them a robust addition to a diversified investment portfolio.

As the year’s fourth and last quarter, which is considered to be a crucial period for businesses, has begun with the start of October, many investors have turned their attention to securing their yearly stock market returns.

On that note, let’s look into some of the best dividend-paying stocks for the fourth quarter of 2021.

The Canadian Imperial Bank Of Commerce, which has been in business since the 1960s, is a dividend aristocrat. In other words, it has a track record of paying regular dividends and of increasing the payout amount for five years in a row.

The fifth largest bank in the country currently pays a dividend of C$ 1.46 per share on a quarterly basis.

The dividend, which noted a yield of four per cent on October 15, is due to be distributed among shareholders next on October 28.

Canadian Natural Resources, with a market capitalization of nearly C$ 58 billion, is one of the leading oil and gas players in the country.

Amid the pandemic last year, when many companies were forced to reduce or cut their dividend payout due to the financial crunch, Canadian Natural continued to pay regular dividends with a robust balance sheet.

This year, as oil prices rose up stronger from their pandemic lows, the Canadian oil producer decided to hike its dividend by 11 per cent year-over-year (YoY) to C$ 0.47 in March.

In Q2 2021, Canadian Natural said that it returned around C$ 1.3 billion to shareholders via its dividends and share repurchases.

As of October 15, Canadian Natural’s quarterly dividend held a dividend yield of 3.653 per cent. 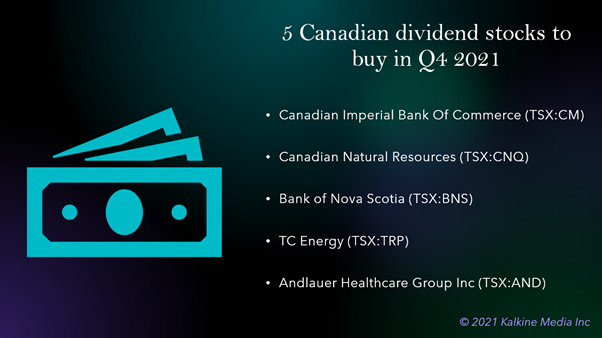 Also a Canadian dividend aristocrat, the Bank of Nova Scotia (or Scotiabank) presently pays a dividend of C$ 0.9 per share on a quarterly basis.

The big six bank is due to pay its next round of dividends on October 28 to shareholders who invested in BNS stocks on or before October 4.

TC Energy, one of the top energy companies trending on the TSX, dolls out a quarterly dividend of C$ 0.87 per share.

The dividend is due next on October 29, to shareholders who invested in TC Energy on or before the close of September 29.

With the oil and gas industry being bolstered by rising crude prices, energy producers like TC energy are likely to get a boost in their stock prices as well.

Andlauer Healthcare, an investment holding company, rakes in most of its revenue from its Specialized Transportation segment, through which it offers tailored temperature-controlled solutions to healthcare customers.

As on October 15, Andlauer Healthcare’s quarterly dividend of C$ 0.05 per piece reflected a dividend yield of 0.427 per cent.

The Vaughan, Canada-based company announced on Tuesday, October 5, that it is buying US transport firm TF Boyle Transportation Inc and the remaining stakes in Skelton USA Inc. These acquisitions, Andlauer believes, will help the company’s cash flow and earnings per share.

Andlauer’s dividend is set to be distributed next on October 15.

One thing to remember when exploring dividend-paying stocks is that the company reserves the right to snip or completely stop paying the dividends at any given time. Hence, along with its perks, dividend stocks too come with a set of risks and investors should keep that in mind before investing.