Ever since the onset of COVID-19 pandemic, technology sector has been performing a pivotal role. The sector is playing at the forefront and allowing businesses across industries keep operations running during the age of lockdown and social distancing. The technology usage boomed in every sphere of life from digital payment, online education, working from home to socialising through virtual means.

ASX 100-listed technology company, NXT has released its FY20 results, which came in at the top-end of earnings guidance provided at the start of the period. Following are the key highlights for the period ended 30 June 2020: 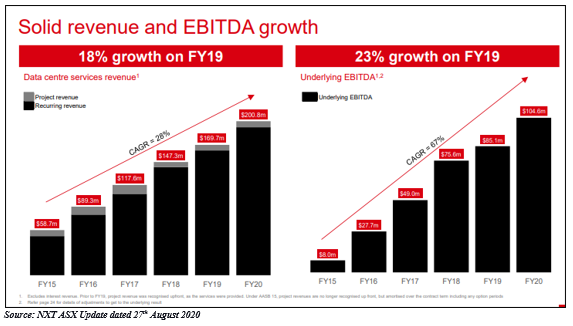 For FY21, the company is expecting underlying EBITDA in the range of AUD125-130 million and capital expenditure of AUD380-400 million.

Final dividend announced for the period stood at 3.5 cents per share (50 per cent franked).

Revenue grew by 10 per cent to USD 189 million while profit before tax increased by 12 per cent to USD 65 million. EBITDA margin stood at 40.0 per cent for the full year. The company reported record growth of 17 per cent in the subscription base to 51,006 subscribers and substantial increase of 15 per cent in new Altium Designer seats sold to 9,251.

Cash balance at the end of the period grew by 16 per cent to USD 93 million. The final dividend declared for the period was AU19 cents, up 15 per cent yearly, taking the full-year dividend to AU39 cents.

Furthermore, MRR for June 2020 stood at AUD 5.7 million, an increase of AUD 2.0 million or 57 per cent YoY, underpinned by North American business contribution. Installed Data Centres increased by 66 to 366 locations and MP1 enabled data centres grew by 141 to 669 locations at the end of June 2020.