With no clear sign of the situation improving drastically, governments and businesses realised that instead of waiting for the COVID-19 storm to abate, it was imperative to take necessary actions to weather the storm. Technology has been at the forefront of such initiatives.

Amid the COVID-19 crisis, when most companies had to allow their people to work from remote locations, it was the technology sector that supported them. The rise in the demand for technology and software to support the daily requirements and office related work allowed these technology companies which offered such technologies to expand.

In a nutshell, we can say that the technology sector has been the backbone of most of the industries during the crisis period and has played a defensive role.

However, this unexpected scenario saw the rise of many scams within a short span. As per a report released by the Australian Cybersecurity Centre, there was a significant increase in the COVID-19 themed malicious cyber activity with Scamwatch receiving more than 3,600 scam reports where a loss of more than A$2.382 million was recorded. Some of the common scams during the period were phishing for personal information, online shopping, and superannuation scams.

As the rising number of cyber scams pose a significant threat to corporations and the government, it is imperative to tackle the situation quickly. Cybersecurity players will play a considerable role as they develop new solutions and offer existing ones to the industry to negate the impact of such scams. As a result, this industry is expected to gain further traction and consequently, garner market participants’ attention.

Some of the Potential Target of Cyber Crime were:

These two are amongst the critical infrastructure facilities, and it is the top priority of the Australian Cybersecurity Centre to secure them. Any cyber incident with these vital infrastructures can have severe consequences on the society and the social and economic well-being of the people living in Australia. In case any system gets hampered for a longer duration, it can result in a significant disturbance in the lives of people.

Several critical infrastructure operators support the decision-making process on the ways to keep in business running & simultaneously let access to complex operational technology assets by the staff working from a remote location.

While the government announced social distancing to prevent the spread of the virus for health reasons, working from home brought challenges concerning cybersecurity.

In this digital world, we cannot imagine our lives without technology. Technology has now become the core of every individual and has a significant role to play for shaping the economy and future of the country.

The Department of Home Affairs’ Industry Advisory Panel report was published during July 2020. As per the report, necessary social distancing and self-isolation indicate that healthcare, education, work, and commerce are being done online. In the present scenario, technology and the ability and willingness of the people to adopt the digital world has appeared as core to a rapid economic recovery.

Many things in the present scenario are at stake, and it is essential to have robust and effective cybersecurity. On that note, the 2020 Cybersecurity Strategy Industry Advisory Panel embraced the prospect to contribute to that outcome.

The panel’s recommendations around a framework with five key pillars: 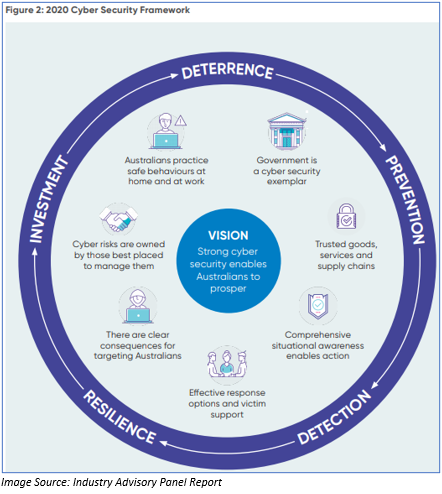 Cybersecurity - the need of the hour:

The world is on the verge of a fourth industrial revolution driven by connectivity & digital technologies. Artificial intelligence, sensors, autonomous machines and systems, edge computing, augmented reality and 5G are technologies that would be used for the development of the new products and services, infuse the physical world with digital, transform business operations, raise human work, and serve customers and people in several unique methods. All of these was true before the arrival of this deadly virus. COVID-19 pandemic has further underlined the importance of the digital economy in Australia.

In the present scenario, where there is rising cyber threat, the cybersecurity can be considered as the need of the hour. Also, pointed above, the government has taken several steps.

In the coming period, it might be possible that significant development would be made in this direction which might provide those companies providing cybersecurity services to evolve and chance to grow in the future.

INTERESTING READ: What Could Be the New Technology Trends Post-COVID-19?

Keeping in mind the criticality of cybersecurity in the present scenario, let us look at a few companies providing cyber-security services:

Do Visit: Challenges Around Cybersecurity and Opportunities for Investors

Technologies which gained traction amid COVID-19:

The entire technology sector has blossomed during this unforeseen scenario with various products and services seeing growing demand. Some of the technologies that have gained a lot of traction this year include:

DO READ: Scope of Perimeter Security Market: A Glance at SOR, DRO, SP3

The ever-increasing number of cybercrimes coupled with the growing uncertainty around the pandemic makes it safe to say that cybersecurity has a critical role to play in the coming months or even years. Companies providing cybersecurity related services are predicted to have their hands full and expected to capture the market’s attention, as the cloud of uncertainty still looms.