All major industrial commodities are competing to secure a recovery in the market. Amid strong demand for Nickel for battery packs and stainless steel, the Nickel prices have recovered substantially to US$14,167 per ton. A further boost to infrastructure development and electric vehicles could further support the Nickel prices in the longer term. 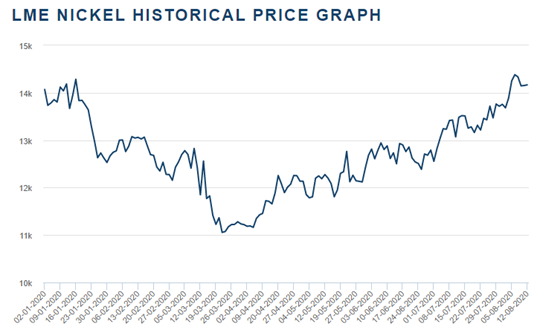 Must Read: Nickel to Witness Supply Surplus in 2020, But Well Poised for a Boom Over the Long-Run

ICE riding to Abyss, an opportunity for Electric Vehicles

The world of mobility has been disrupted by the pandemic in more ways than a few, the rising voices in favor of the innovative and clean energy offers an alternative to the conventional internal combustion engine (ICE) vehicles.

The dismal automotive environment is evident from the recent sales figures by the OEMs, including some of the largest carmakers such as Toyota and General motors.

The European Automobile Manufacturers’ Association has anticipated a record decline of over 25% to around 9.6 million units in 2020 with the full recovery to take years.

The changing EV ecosystem is credited to the efforts of an innovative car manufacturer Tesla which triggered a revolution with the Tesla Roadster. Ever since the electric vehicles have proven their worth with advancement in battery technologies to substantially improve the range and reducing the cost of the vehicle.

In fact, as per the IEA, the battery costs have declined by as much as 85% during the past 10 years making ICE vehicles a practical contender. Government reforms across the globe are now announcing incentive push in favour of electric vehicles.

China recently re-introduced the electric vehicle subsidies, which was earlier withdrawn to support the EV sales. The Shanghai government further sweetened the offer with additional incentives to promote the EV market.

But the major push came from the European region which anticipates overtaking China as the World’s largest EV market in 2020. Over 20 out of the 27 European Union members already offer incentives in terms of bonus payments or bonus to purchase electric vehicles.

France rolled out an €8 billion stimulus plan enhancing the government incentive to €7,000. France plans to achieve a target of 1 million electric vehicles by the year 2025.

The strong boost to the electric vehicles triggered by the government reforms will trigger the surge in demand for the battery grade Nickel.

Lynn Lake Nickel Sulphide project offers a highly prospective exploration play in the presence of established mining infrastructure. The regional setting is home to large mining operations including Vale SA’s Thompson Nickel mine and Hudbay Minerals’ 777 mine. Lynn Lake is amongst the best brownfield plays in entire North America. 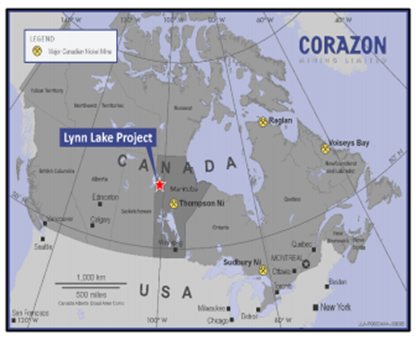 Recently, Corazon exercised its option to acquire the Dunlop project and the historic EL mine, bringing entire Lynn Lake project area ownership under Corazon’s banner. Lynn Lake project operated for 24 years until its closure in 1976 producing over 206,200t Nickel and 107,600t Copper.

The recent exploration programs at the Lynn Lake program focuses on near-surface mineralisation area within or surrounding the historical mining centres and regions surrounding the existing mineral resources.

Corazon in early August announced the resumption of drilling operations at the drill hole FLC2020- 22 at the Fraser Lake Complex (FLC), 5 kilometres from the historical mining centres at Lynn Lake.

The drilling at the drill hole FLC2020- 22 was suspended temporarily after reaching the top of the targeted anomaly at the downhole depth of 523.4 metres. The drilling program was resumed after lowering of water levels and is anticipated to be completed in the short term.