Exploration and resources development company, Podium Minerals Limited (ASX:POD) has reported another major achievement in its journey towards the advancement of its 100% owned Parks Reef PGM Project.

Podium Minerals has successfully completed a reverse circulation drilling over a total of 17 drill holes for approximately 1,870m through its latest drilling programme in the western sector of Parks Reef PGM Project.

POD’s initial results comprise platinum, palladium and gold assays from the drilling, which show the consistent intersection of significant mineralisation extending from the near-surface in the main PGM Horizon of Parks Reef.

Some of the significantly thick PGM plus gold intercepts through drilling include the following:

The present drilling has been designed to intercept the mineralisation between the surface and down to a depth of nominally 100m from the surface with a focus on a section of strike between the west and central resource blocks.

Furthermore, the current program is a part of POD’s approach to systematically grow the resource base with an aim to grow the extent of the total resources to a combined length of 8.5 km. 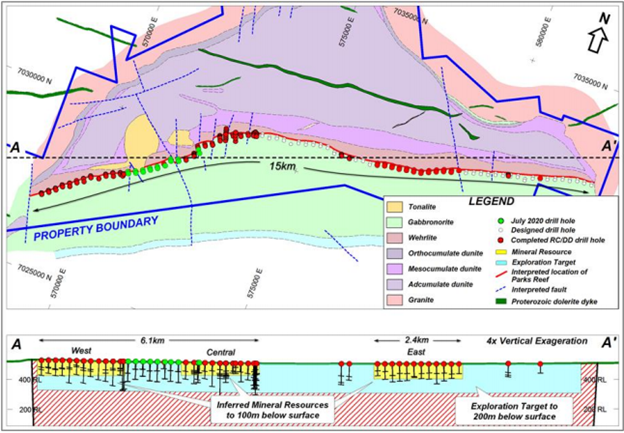 The drill programme aims to extend the total resources to a combined length of 8.5km, including a continuous resource block spanning approximately 6.1km over the western half of Parks Reef

Notably, earlier drilling has defined Inferred Mineral Resources in 3 separate resource blocks in the west, central as well as eastern sectors of Parks Reef. This indicated contained metals of 1,140,000 ounces of combined PGM plus base metal credits with 37,300 tonnes copper.

Interestingly, a gold and base metal enriched mineralised horizon lying in the hanging wall above the main PGM Horizon of Parks Reef has been demonstrated through earlier work. Moreover, the continuation of the base metal horizon in present drilling programme has been indicated through geological logging and the distribution of gold in the assay results. 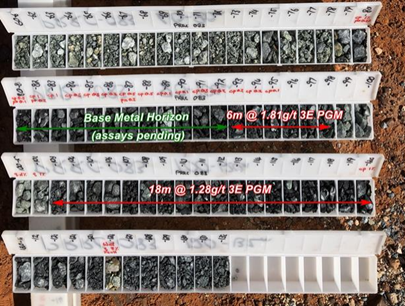 Visually distinctive contact at the top of the reef can be seen through the rock chip tray for hole PRRC083. Furthermore, significant metal grades in the Upper PGM Horizon with 4m @ 4.41g/t 3E PGM from 18m, comprising 1.86g/t Pt plus 0.82g/t Pd plus 1.73g/t Au, within a broader intercept of 19m @ 2.11g/t 3E PGM are shown by the drill hole PRRC088 which intersected mineralisation in the oxide zone.

POD looks forward to putting mineralised intervals for multi-element analysis, including re-assay for copper and nickel.

Rhodium is one of the PGM and a preferred material to instigate the reduction of nitrogen oxides to harmless nitrogen in advanced 3-way catalytic converters for petrol and hybrid electric vehicles.

Platinum, palladium and gold (3E PGM) have been detected through the routine assay process employed by POD.

Opportunistically, there has been a rising demand for rhodium and declining mine supply due to which its prices have been escalating since 2016. South Africa dominates the mine production space for rhodium with 82% of global mine supply in 2019.

Further, there was a 9% increase in the Demand for rhodium during 2019 with the adoption of more stringent vehicle emission regulations in most major auto markets. Recently, rhodium price has experienced a continued growth trend with the current price close to its pre-COVID-19 prices at USD 12,400 per ounce due to low supply response.

Importantly, rhodium has the potential to be a significant revenue driver as it may only make up a small percentage of the metal composition. 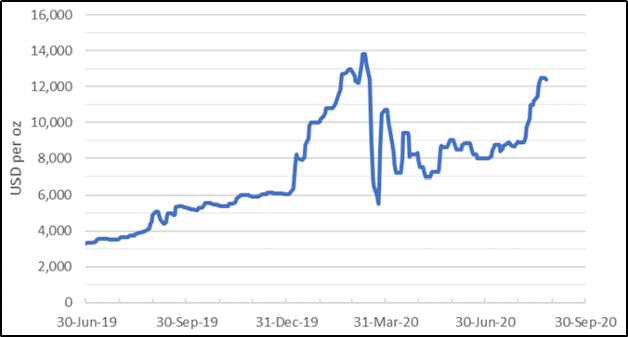 POD intends to continue spot assay of drill holes as it continues to drill for inferred classified resources. However, POD further plans to routinely assay for rhodium once it steps to in-fill drilling for indicated resources.

POD is optimistic that this shall allow rhodium to be included within the Mineral Resources for Parks Reef.

Additionally, POD is also planning to its continuing work programmes throughout the rest of 2020 and Continued systematic resource drilling is planned to define a materially significant near-surface PGM resource base.

POD is presently undertaking metallurgical testwork, which is planned to feed into the commencement of engineering design to define a development strategy for Parks Reef in parallel with the resource development Podium.