The Company has achieved so much in just over 12 months of exploration. Not only has it established a Maiden JORC Resource at a discovery cost of less than $0.001 per ton of resource, multiple exploration targets have been identified, with preliminary results of many supporting further high-grade tonnage additions to the Company’s preliminary resource.

Continuing its development trajectory, MRG Metals has provided an impressive and significant progress update on metallurgical testwork undertaken by IHC Robbins in Brisbane, on a 100 Kg bulk sample of mineralised material from Koko Massava Mineral Resource. Not only has the metallurgical analysis provided clarity on HMS assemblage data, but it has also successfully produced three potential products which notably have viable smelter alternatives.

Besides this, processing of material via the developed process produced three potential products. Let us cast an eye on this significant revelation below. 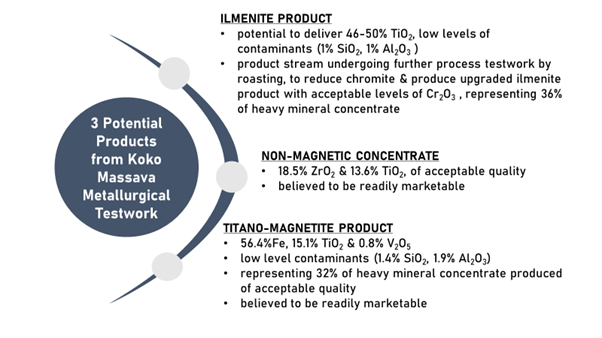 Overall TiO2and ZrO2 recoveries, excluding semi-processed streams and any optimisation, into the potential nonmagnetic concentrate is calculated at 2.1% and 75.6% respectively.

Of noteworthy significance is- 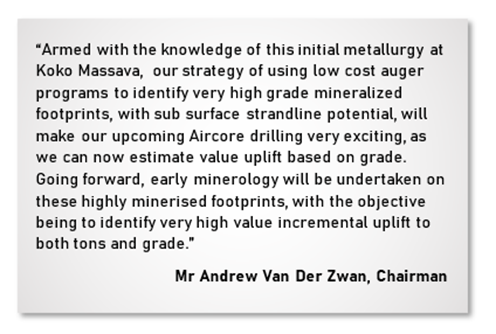 Metallurgical testwork was undertaken on a 100 Kg bulk sample that is representative of mineralised zones of high valuable heavy mineral from the Koko Massava Mineral Resource by IHC Robbins in Brisbane. It followed the delivery of significant Koko Massava maiden mineral resource estimate of 1,423 million tonnes at 5.2% total heavy mineral. Additional substantial tonnage has been identified as exploration potential.

The goal of the geometallurgical test work is to-

IHC Robbins continues to undertake the metallurgical study. A further market update is likely once Final Report is received. IHC Robbins stated that additional, more detail test work to ascertain better the potential product qualities could be completed during the next phase of metallurgical test work using a larger bulk sample.