ERL has received encouraging results from the drilling program, and drilling has continued to intercept copper-nickel mineralisation at depth and down plunge in the north-east of Smith Well. Additionally, an elevated PGE mineralisation in hole YRC20-28 has been encountered through drilling at YT01.

Let us take a closer look at these developments at the Yuinmery Project:

Drilling was conducted at the RC hole YRC20-28 in June 2020 to test for depth extension to the copper-gold mineralisation encountered in previously drilled YRC20-14. The hole has returned encouraging results, especially with broad widths of Cu(copper)-Ni(Nickel) mineralisation and the presence of elevated Pd (palladium) and Pt (platinum) values encountered towards the bottom of the hole. 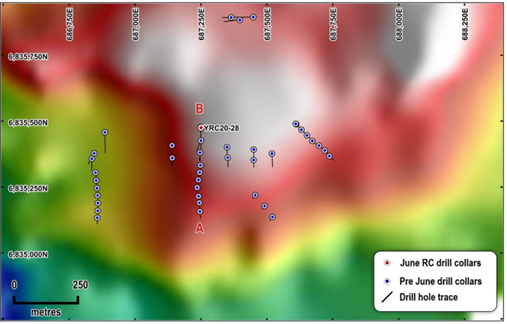 Another valuable observation in YRC20-28 is the highly anomalous palladium and platinum values associated with the copper and nickel towards the end of the drill hole. Moreover,

Presently, Empire is engaged in re-assaying latest drilling to help in recognising the geological setting of YT01 and its implications for mineralisation.

Managing Director of Empire Resources, Sean Richardson said that the Company shall continue to advance its exploration efforts at Yuinmery and looks forward to providing regular updates as progress continues at this exciting Project.

Smith Well Prospect at the Yuinmery Project is a historic copper-gold prospect where drilling has recently identified anomalous nickel, and the prospect is inferred to host two steeply dipping, parallel mineralised horizons.

Strongly sulphidic mineralisation containing chalcopyrite, pyrrhotite and pyrite in varying concentrations has been intercepted through drilling in 2020 till date.

After the drill program in the first quarter of 2020, Empire had completed a further six RC holes at Smiths Well in June 2020, of which:

ERL has intersected Gold mineralisation of 4m @ 1.0g/t Au from 56m (YRC20-27) in the oxide zone at Smith Well prospect, and the RC Drilling in June has continued to intersect disseminated to matrix sulphide mineralisation with assay results including:

On its way ahead, Empire looks forward to furthering exploration for a definitive assessment at the prospect.

Managing Director of Empire Resources, Sean Richardson commented that the rapid progress at the YT01 Prospect from a geochemical target to advanced exploration prospect with drilling clearly demonstrates the potential for the multitude of remaining untested targets and prospects at Yuinmery Project.

The growth in the value of investment represents a significant upside for ERL and improves prospects for further investment.

Overall, ERL continues to deliver excellent exploration results at the Yuinmery Project. Moreover, there has not been any observation of PGE’s historically in such high concentrations west of the Smith Well Prospect. Furthermore, ERL believes that the Yuinmery Project offers excellent opportunities for significant discoveries with the presence of a broad zone of palladium and platinum metals at the YT01s Prospect.

Please note: All financials used above are in AUD, unless otherwise specified.