The Yuinmery Copper-Gold Project is located in the base metal-rich Youanmi greenstone belt while the Penny’s Gold Project in the prolific Eastern Goldfields Region of Western Australia. Notably, ERL has identified several exploration targets at these projects which offer substantial potential for development in the region. 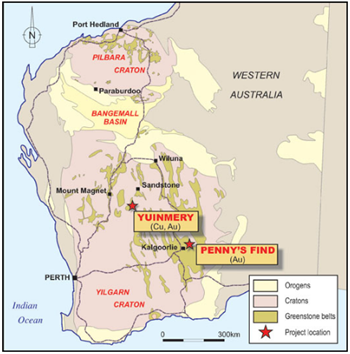 Related: Empire Resource’s Investment in NTM Gold Proves Lucrative, Grows From $0.0325 to ~$0.09 Within a Year

Let us dive deep into the details of these highly prolific projects of Empire Resources.

All the assets, as well as exploration tenements, in relation to the Penny’s Find gold mine, were acquired in full ownership by ERL and the project is located 50km east of Kalgoorlie, Western Australia.

Moreover, the gold mineralisation at Penny’s occurs within a lower order northwest-trending shear that intersects a northerly trending structure.

ERL completed a comprehensive geological review at its Penny’s Gold Project, for which the Company that engaged an independent geological consultant during June 2019 quarter.

Moreover, the previous drilling has indicated the potential for the area, especially 1.7km to the north of the Penny’s Find open-pit mine. Previous drilling at this mine has intercepted elevated gold mineralisation including 4m @ 1.63g/t Au from 32m from RC hole PFRC10-07.

The Yuinmery Copper-Gold Project comprises of five granted tenements, of which two are mining, and three are exploration, spread over a total area of 84.5 km2.

Notably, the project has an impressive current JORC 2012 Resource of 2.52Mt @ 1.31% Cu, 0.49g/t Au and 1.76g/t Ag using a 0.5% Cu cut-off and eighteen new target areas have been identified for follow up exploration at the project. These targets were identified through the integration of the geochemical and geophysical datasets.

The targets identified through the geological survey are at various stages of exploration development. Moreover, ERL has identified some targets as priority 1 targets in the south that are deemed ready for reconnaissance drilling.

On the other hand, additional soil sampling programs shall be required to support reconnaissance drilling at priority 2 and 3 target areas.

Some of the prominent target areas of ERL at Yuinmery Project include the following:

Sulphides, including chalcopyrite, pyrrhotite and pyrite have been intercepted in varying concentrations through drilling during 2020 till quarter ended 30 June 2020.

ERL’s tenement holdings’ schedule released in June quarterly activities shows that the Company has obtained 100% interest in the project and had held the same interest at the end of previous quarter ended 31 March 2020. 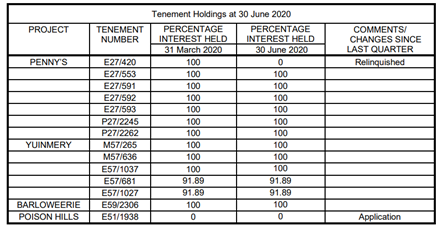 More importantly, ERL has a professional leadership team with a depth of experience in exploration, development and finance and share a strong commitment towards building a mineral business that is sustainable while being profitable.

Presently, ERL is engaged in re-assaying recent drilling to help to develop better insights about the geological setting of YT01 and its implications for mineralisation.

All financials are mentioned in AUD, unless otherwise specified.